Energean plc (LSE: ENOG, TASE: אנאג), the gas producer focused on the Mediterranean, is pleased to announce the appointment of Andreas Persianis as Independent Non-Executive Director.

Mr. Persianis replaces David Bonnano, who has stood down from the board, and will also participate in the Audit & Risk Committee of Energean’s Board of Directors.

The change, along with the appointment of Ms. Kimberley Wood as Independent Non – Executive Director, took effect after the close of business on 26 July 2020 and is aligned with Energean’s strategy towards more independence and diversity, in accordance with the highest ESG standards, which have always been top priority for the Company. Furthermore, these changes are made in anticipation of the needs of the Company post the closing of the Edison E&P SpA acquisition, which was recently approved by Energean shareholders.

Karen Simon, Chairman, said:
"I look forward to working with Andreas and receiving his valuable input and knowledge of the Mediterranean region”.

Andreas Persianis, new Independent Non-Executive Director said:
“I am looking forward to serving on the Board of such a dynamic and growing company and contributing strategic analysis and financial markets expertise at an important juncture for the company”

Andreas Persianis - summary CV
Mr. Persianis was born in Nicosia in 1963 and is an experienced non-executive director with over 30 years’ international financial markets experience in central banking, asset management and Corporate Strategy.
He is currently the Managing Director of Fiduserve Asset Management in Cyprus, a regulated Alternative Investment Fund Management company that sets up and manages private funds for a diverse range of private and institutional clients.
Before that he was founder and Managing Director of Centaur Financial Services, a discretionary portfolio management company with presence in the UK and Cyprus.   He has served as a Non-Executive Director at Central Bank of Cyprus (2014-2019) and on the Bank of Cyprus Board in 2013.  He was recently elected to the board of Hellenic Bank (pending ECB approval) as an independent Non-Executive Director. He has also worked as a Senior Manager at Bain & Company (London), world’s largest strategy consulting firm with Boston, USA Headquarters.
Andreas Persianis holds an Electrical Engineering (Upper Second Class Honours) undergraduate degree from the University of Cambridge and a Masters in Business Administration (MBA, Major in Finance & Investment Banking) from the Wharton Business School. 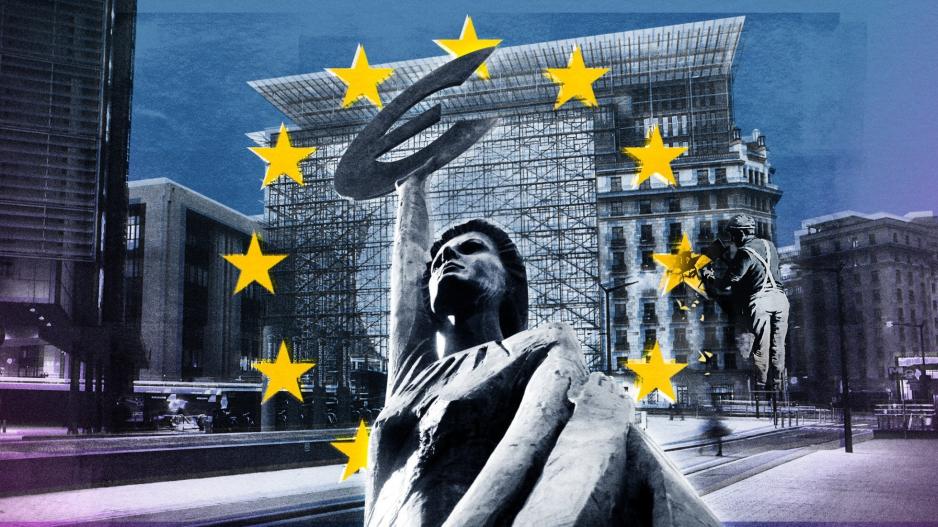 Poland’s fractious ruling coalition could face a make-or-break moment as the process to ratify the EU’s 750 billion-euro pandemic stimulus gets under way. The government will today discuss the draft bill before it heads to a vote in parliament. The junior coalition party of hardline Justice Minister Zbigniew Ziobro has vowed to oppose the bill, arguing it might put Poland on the hook for the debts of Greece and other states. Without his votes, the government may lack the majority to pass the package. The opposition wants more local control over spending as a condition for its support. Poland’s de facto leader Jaroslaw Kaczynski warned the three-party coalition risks collapse unless the plan is approved. The Polish ratification is just one of the headaches facing the EU’s flagship recovery fund, alongside a pending ruling in Germany’s top court and still incomplete national spending plans. “We are getting increasingly concerned,” Merrill Lynch economists wrote in a note to clients last week, reflecting growing market unease with Europe’s bickering over something so crucial.

What’s Happening
Regling’s Reassurances | Klaus Regling, the managing director of the European Stability Mechanism, says there’s nothing to worry about. The EU economy doesn’t need more fiscal stimulus and the recovery fund is on track to make its first disbursements on time this summer, he told us in an interview. Still, we hear that a decision from Germany’s top judges that could block the whole thing may not come this week.

Merkel’s Succession | In other unsettling news, officials close to Angela Merkel are worried that her conservative bloc risks losing the German chancellery in September’s election because of the increasingly damaging battle to follow her at the top of the ticket. The two parties in her alliance are publicly backing different candidates, setting up a dramatic showdown over the future leadership of Europe’s largest economy.

Draghi’s Pressure | Prime Minister Mario Draghi is raising pressure on drugmakers in a bid to speed up vaccine deliveries as Italy risks missing a key target in its inoculation campaign. Here’s what Italian officials told us about the premier’s moves.

Blockchain Bonds | The European Investment Bank plans to harness the power of blockchain to sell bonds, potentially boosting as a tool for the region’s debt market. The EU’s investment arm hired Goldman Sachs, Banco Santander and Societe Generale to explore a so-called digital bond, which would be registered and settled using the digital-ledger technology, we’ve been told.

In Case You Missed It
Yield Rush | Austria and the U.K. are the latest European governments rushing to lock in long-term borrowing costs before yields rise any further. Government bond yields have rebounded from all-time lows as investors begin to price an end to the pandemic, with Nordea Bank warning that the window to sell long-dated tenors is now closing.

Russia’s Spending | Vladimir Putin wants to get Russia’s economy back on track to grow after the pandemic with a burst of spending. His government is working overtime to find the money to pay for it. Read our dispatch from Moscow.

Astra Vaccine | Portugal, which holds the EU’s rotating presidency, has written to the bloc’s health ministers, proposing a common approach for the use of AstraZeneca’s Covid-19 vaccine. In the letter, which we’ve seen, the country suggests a joint position that would see the Astra shot limited to people over the age of 60.

Game Master | Dusting off old board games or buying new ones over the past year in your effort to avoid watching Bridgerton, you might have noticed something about Catan, Game of Thrones, Ticket to Ride, Agricola, 7 Wonders and Lord of the Rings: they are all made by the same French company. Here’s why.

The British finance industry has taken a number of knocks in 2021. Since the U.K. left the EU’s single market at the start of the year, London has faced a series of challenges to its pre-eminence, most notably the embarrassment of seeing Amsterdam — a city one tenth its size — take over as the No. 1 location for European share trading. 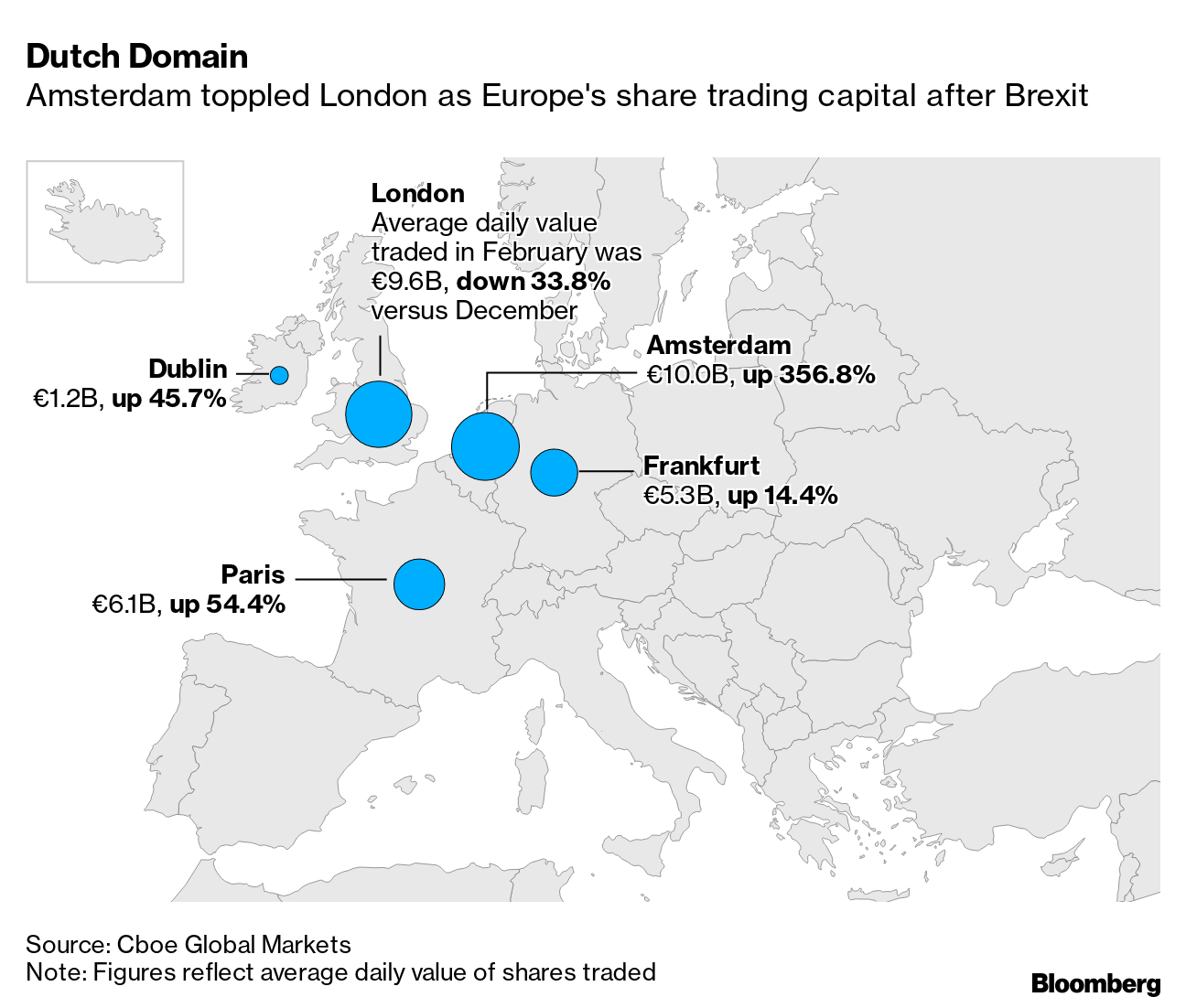