Germany goes to the polls on Sunday to say goodbye to Angela Merkel after 16 years at the helm of Europe’s biggest economy. The EU will have to adjust to her not being there to broker compromises, but who gets to be her successor is the wrong question, according to the Centre for European Policy Studies. A three-party coalition will weaken the role of the chancellor as parties face pressure from members and interest groups, the think tank found. A victory by the Social Democrats could see Germany become more open to a European easing of tight budget rules during the post-pandemic recovery. Green involvement in government could shift Germany’s — and the EU’s —  take on climate policies. Foreign policy could be the toughest test. Neither the SPD nor the Greens are keen on extra defense spending, even as European distrust of the U.S. is mounting. Even so, in the final election debate, the candidates insisted they wanted to make the EU more assertive internationally.

What’s Happening
TTC on Track | The EU will move ahead with its first meeting of a new trade and technology council with the U.S. in Pittsburgh next week. France had been pushing for a delay, in protest of the new defense pact Washington sealed with Australia and the U.K., but President Joe Biden’s apology helped keep the planned meeting on track. “Strategic alliances are about shaping common approaches and also overcoming difficulties,” Trade Commissioner Valdis Dombrovskis tweeted late yesterday.

Gas Crunch | Russia is unlikely to send extra natural gas to the EU until November, analysts say. Gazprom’s extra output is staying at home to refill storage sites that were severely depleted by a long and cold winter, while Europe faces record-breaking prices with no relief in the immediate future.

Solo Path | The European Central Bank is looking increasingly lonely. Central banks from Washington to London this week are signaling more alarm over faster inflation, but the ECB is maintaining its ultra-stimulative path.

In Case You Missed It
Italy Offset | Italy plans to spend more than 3 billion euros to offset higher energy costs for consumers and businesses, Prime Minister Mario Draghi said yesterday. Italy wants to use revenue from the EU’s emissions trading system and avoid tax increases that could derail a fragile economic recovery. Policymakers are walking a tightrope to stoke growth and avoid inflation spikes as energy prices skyrocket. Hungary’s central bank chief labeled soaring inflation a “public enemy” that must be fought.

Poland Blinks | Parts of Poland that declared themselves LGBTQ-free zones in defiance of EU diversity policies began reversing their stance after Brussels halted as much as 126 million euros of pandemic aid. The eastern Swietokrzyskie region voted this week to revoke a 2019 declaration targeting LGBTQ “ideology.”

EIB Slammed | The EU’s in-house investment bank was criticized by EU lawmakers over its inadequate responses to questions about alleged harassment. Nineteen out of 24 alleged harassers named in complaints still work at the bank, while almost half of the alleged victims have left, the European Investment Bank told members of the European Parliament. 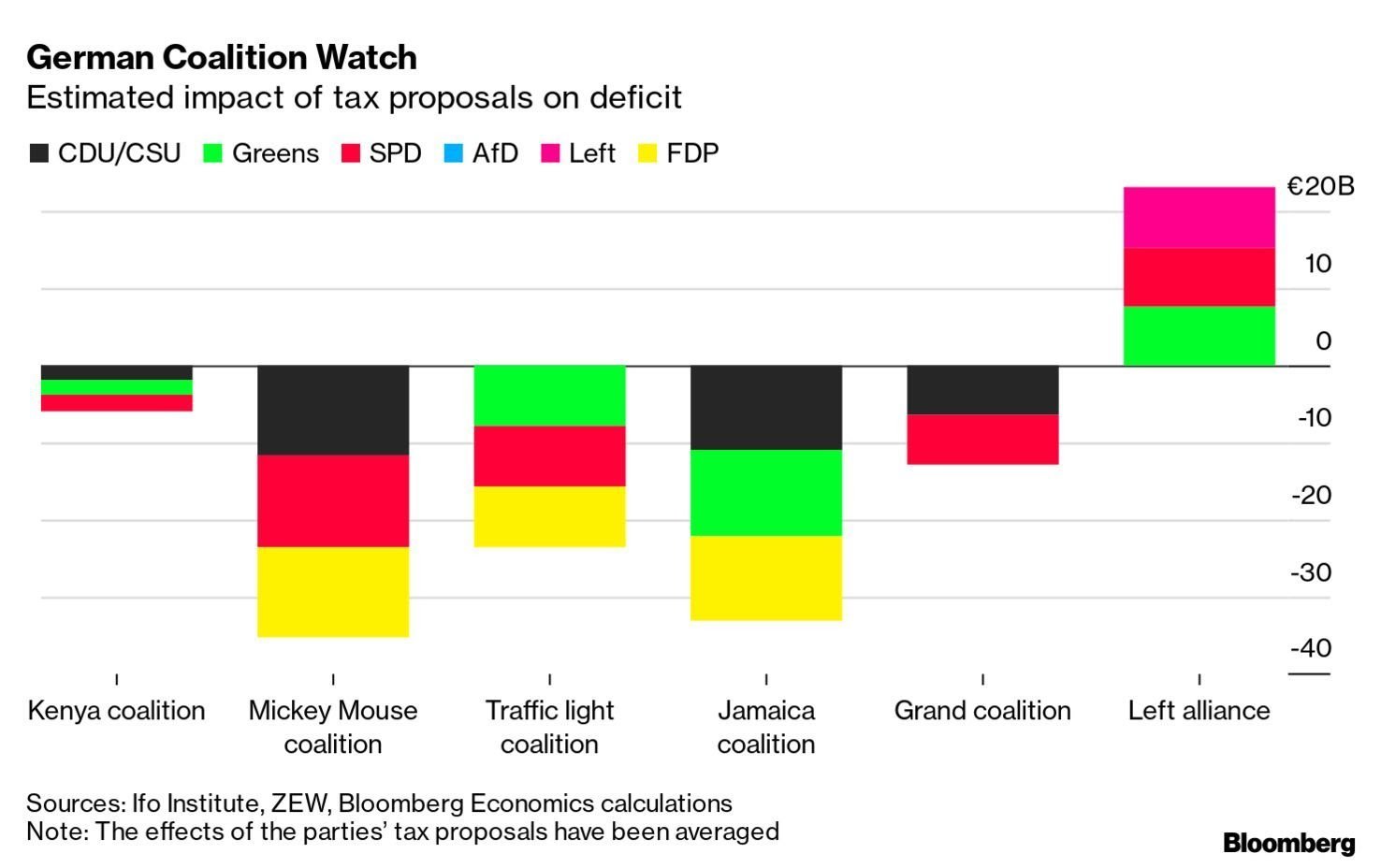 In Germany, the Social Democrats, the Greens and the Left Party have proposed tax hikes targeting higher-income households, as well as a continuation of the solidarity surcharge and a new wealth tax. The CDU/CSU alliance and the liberal Free Democrats are pushing tax cuts for corporations and higher earners. These calculations by Bloomberg Economics look at the likely fiscal stances of various potential coalitions. 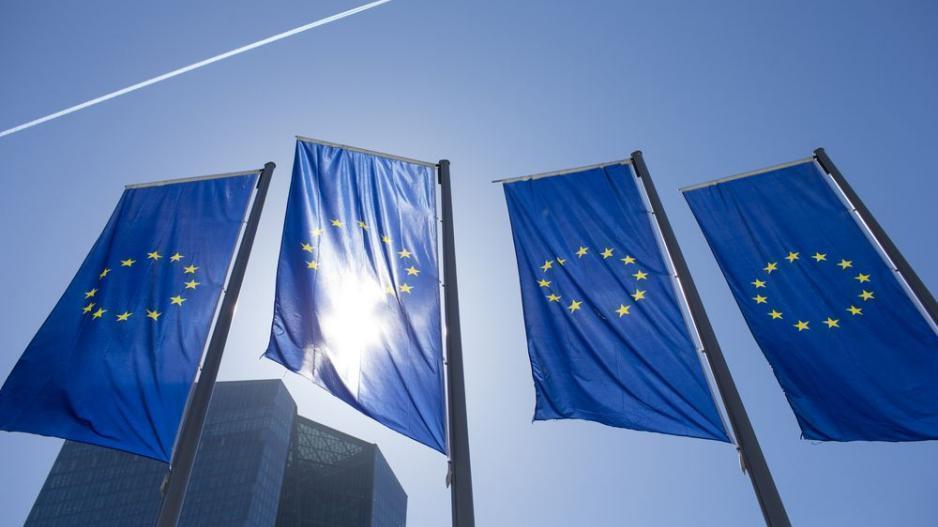 Top negotiators from the EU and the U.K. will meet again tomorrow in London to try and overcome differences over how to improve cross-border trade in Northern Ireland. Expectations are low. Downing Street continues to demand removing the European Court of Justice oversight of the Northern Ireland protocol, and the Commission’s offer to facilitate the trade of goods is seen as insufficient. Overshadowing the talks is a dispute between London and Paris over access to U.K. waters, which is getting worse. France said yesterday that it will announce retaliatory measures against Britain as soon as today, as it blamed the other side of breaching the trade deal signed with the bloc following Brexit.

What’s Happening
Poland Fined | The EU’s top court hit Poland with a record daily fine of 1 million euros yesterday for failing to comply with an order to dismantle a controversial regime for disciplining judges. It follows last month’s 500,000-euro daily penalty that Warsaw got over its failure to close a mine, as the legal dispute escalates.

Transitory inflation | The European Central Bank is set to reassure consumers facing surging prices and investors wondering about the consequences that it’s just transitory and not about to spiral out of control. The governing council is meeting today amid growing energy costs and supply bottlenecks that are likely to show an acceleration in inflation that is already the fastest since 2008.

Helping Moldova | The EU and Moldova will strengthen their bilateral cooperation today, as its government struggles with an energy crisis. The Commission offered 60 million euros to the eastern European country yesterday to cope with mounting gas prices. The bloc is worried that Russia is weaponizing its energy supplies against the country.

Costa’s Troubles | Portuguese Prime Minister Antonio Costa may face early elections after parliament rejected his minority Socialist government’s 2022 budget. In an initial vote yesterday, the Communists and the Left Bloc joined other groups to oppose the spending plan. President Marcelo Rebelo de Sousa has said that if the budget is rejected he’ll dissolve parliament, which would likely lead to early elections as soon as January.

In Case You Missed It
Nuclear Talks | Iran said it had agreed with the EU to restart big-power talks to revive the 2015 nuclear deal before the end of November, after negotiators from both sides met yesterday in Brussels. The U.S. has long said that it’s ready to resume talks to curb Iran’s nuclear ambitions in exchange for sanctions relief. It’s still unclear when and where the talks will take place.

Digital Rules | The European Parliament can’t yet agree on which big tech firms should be targeted by the Digital Markets Act, jeopardizing a deadline to vote on the proposal this year. MEP Evelyne Gebhardt said excluding AirBnB and Booking.com would be a “red line.” Lawmakers have ditched a Nov. 8 vote and are now trying to get a deal next month. Governments are also close to agreeing on their version of the rules.

Chip Deal | Nvidia’s planned takeover of U.K. chip developer Arm could increase prices and reduce innovation, the Commission said yesterday as it opened an extended investigation. A long list of industries could suffer from the deal at a time when more and better chips are sorely needed. Rivals might not want to share information with the merged company, the regulator said.

Green Buffers | The EU will decide in 2023 whether to recommend capital relief to banks supporting a green transition, two years earlier than planned, according to banking legislation proposed yesterday. Other options are to penalize lending to polluters, or a combination of the two. The proposal comes amid growing evidence that pledges to address rising temperatures are failing to achieve significant change. 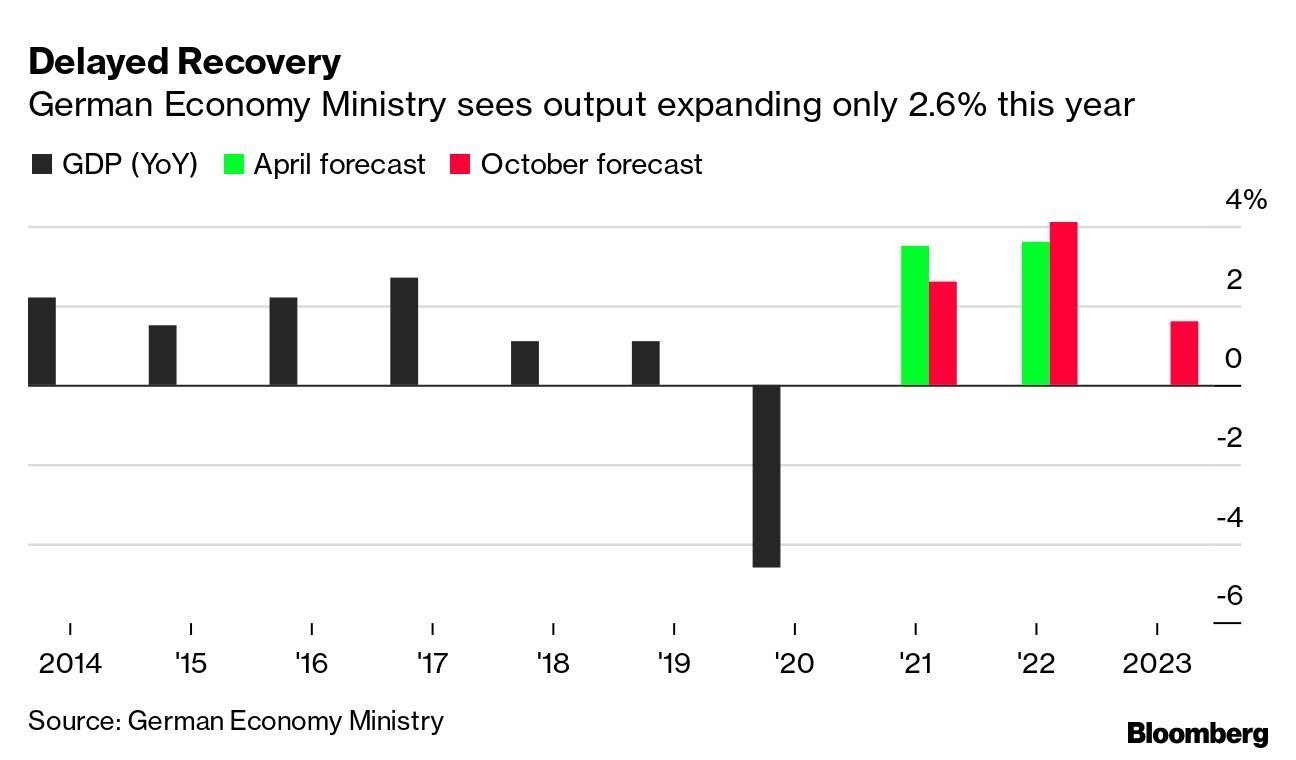 The lingering effects of the pandemic, rising energy prices and supply bottlenecks are weighing on the German recovery. The government cut its GDP forecast for 2021 to 2.6% from 3.5% expected in April. The shortfall will be partially made up next year, with 2022 growth revised up to 4.1% in from 3.6%. Europe’s economic engine will return to its pre-pandemic level by the end of March, one quarter later than expected.