Brussels Edition:  All eyes on Cornwall

The Group of Seven kicks off its summit in Cornwall, England today. Top of the agenda will be Covid vaccines and climate change. The leaders of the U.K., U.S., Italy, Germany, France, Japan and Canada along with the EU are expected to pledge an additional 1 billion doses to help inoculate 80% of the world’s population by the end of next year, according to a draft statement we’ve seen. The leaders are also set to commit to providing new money towards helping developing countries with their green transitions. They will renew their pledge to ditch international financing for coal and keep global temperatures from rising beyond 1.5 degrees Celsius. Russia and China will likely dominate the foreign policy agenda. The G-7 want to stand up for democratic values while trying not to antagonize Beijing too much. After all, they need China on board when it comes to taking whatever is agreed this weekend on climate action to the G-20 and COP26. For more, check out our G-7 Guide!  - Alberto Nardelli and Katharina Rosskopf

Warning China | “There is growing divergence between Beijing’s coercive policies and our values,” NATO leaders will declare on Monday, according to a draft of their joint communique that we’ve seen. It will be the first time the alliance makes such extensive references to China in a leaders’ statement, warning about Beijing’s growing nuclear capabilities and reiterating the West’s determination to address such a challenge.

Ireland Insisting | While the EU and G-7 are pushing for an international solution on corporate taxes, Dublin is seeing a problem with the proposal of a global minimum rate. Ireland is at risk of losing billions from a tax overhaul, if it’s forced to raise its levies on companies. Finance Minister Paschal Donohoe will make the case “for the ability of small economies like our own to set a rate and to set that rate at 12.5%.”

Holding the Line | French President Emmanuel Macron joined the ranks of EU officials stressing that there will be no change to the Northern Ireland protocol. “Nothing is negotiable,” he said at a news conference before the G-7 summit. The bloc is once again at odds with the U.K., this time over the export ban of some meat products.

Chip Strategy | EU Industry Commissioner Thierry Breton will tour Leuven-based IMEC, a world-leading semiconductor research organization, as he pushes his strategy to produce the next cutting-edge chips in Europe despite some doubtful industry voices. The visit comes as the U.S. and EU will announce a partnership next week to boost chip supply.

Faster Buying | The European Central Bank renewed a pledge to deliver faster bond buying even as officials acknowledged for the first time since 2018 that the euro-area economy is no longer overshadowed by risks to its growth outlook. However, policy makers differed over how much bond-buying would be needed when liquidity in financial markets is thinner during the summer, we were told. The discussion was left unresolved.

Greener Cities | Paris, Brussels and Madrid got another boost in their quest for tougher clean-air rules. Advocate General Michal Bobek, adviser to the EU’s top court, backed a 2018 decision saying EU rules were too lax to fight pollution. The Commission “unlawfully altered the existing emission limits,” Bobek said in a non-binding opinion.

Airlines Deflecting | Carriers are pushing to retain the Carbon Offsetting and Reduction Scheme for International Aviation over the EU’s more rigorous Emissions Trading System, according to climate watchdog InfluenceMap. They are also urging the EU to delay moves to sustainable aviation fuel, or SAF.

Rental Car Cost |  This summer in Europe, rental cars are blowing the travel budget. The soaring cost is particularly acute in Spain and Italy, and most pronounced on the islands of Majorca and Ibiza — which typically welcome millions of sun-starved Brits and Germans. Rental companies are struggling to restock fleets they drastically shrank last year. 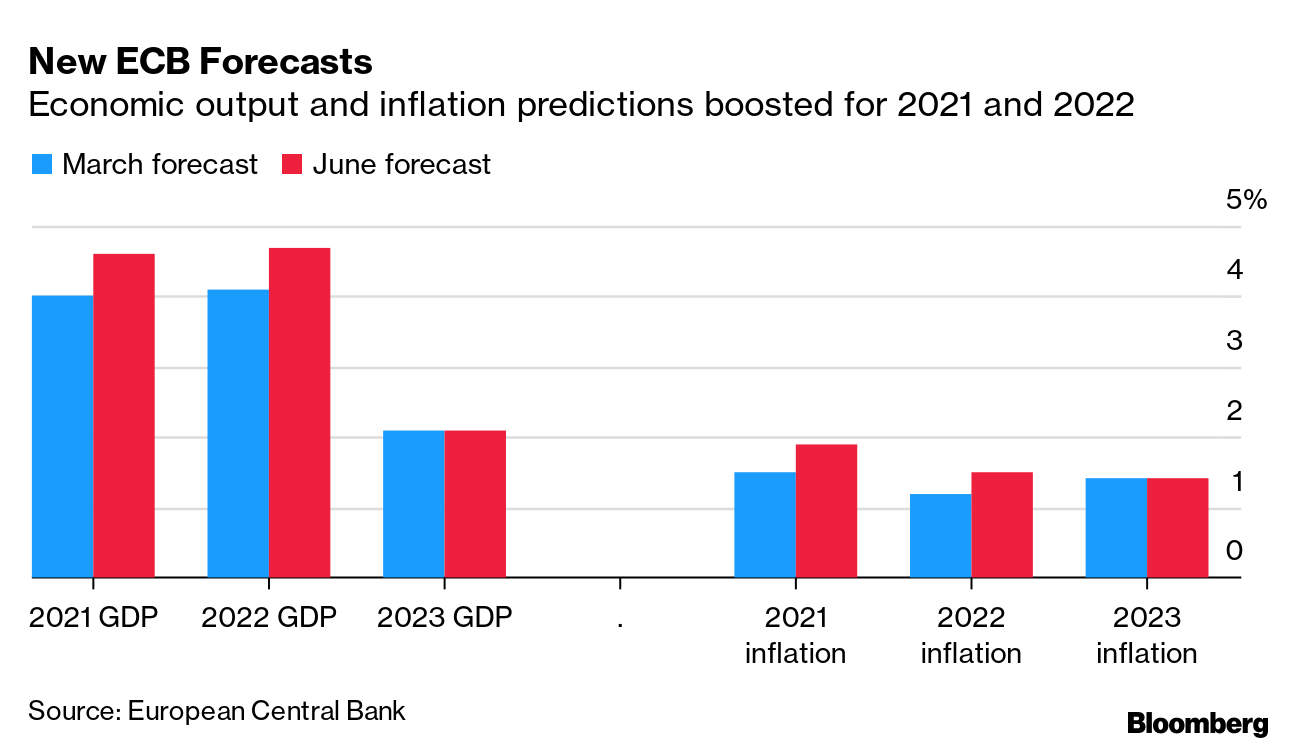 The ECB’s rate decision was paired with a more optimistic outlook for growth in 2021 and 2022. Policy makers both in the euro zone and in the U.S. argue that prices are being driven by temporary factors including higher fuel costs and manufacturing bottlenecks that will be resolved before too long. In the euro area, inflation climbed to 2% in May, technically above the ECB’s target. The institution’s last forecasts, however, showed it missing its goal both next year and in 2023.