NATO foreign ministers get their first chance today to discuss — in person (the omicron variant notwithstanding) — the Russian military build-up near the border with Ukraine. That’s at the top of the agenda for two days of talks in Riga, with NATO Secretary General Jens Stoltenberg warning yesterday that aggression against Ukraine “would come at a high price and have serious political and economic consequences for Russia.” Here’s our analysis of Russian President Vladimir Putin’s thinking, and on the window of opportunity for diplomacy. The Riga meeting will cover a wide range of topics, from the alliance’s strategic plans and how they fit with those of the bloc to lessons learned from the Afghanistan pullout. - John Follain and Katharina Rosskopf

Omicron Summit | EU leaders are weighing whether to hold an emergency virtual summit on Friday on the arrival of the omicron variant even as the bloc was already battling sharply rising cases. The timing of the possible video call has yet to be determined.

German Curbs | Germany’s top court will publish a ruling today on the scope of restrictions the government can impose to tackle the pandemic. We're told that the outgoing and incoming chancellors, Angela Merkel and Olaf Scholz, will then hold talks with the 16 state premiers to discuss the ruling and consider their next steps, possibly including tighter curbs.

Delayed Rules | The European Commission is delaying new anti-greenwashing rules for fund managers by another six months, saying it won’t have enough time to review proposals from regulatory bodies. The new deadline of January 2023 means that the investment industry will have to wait longer for detailed information needed to correctly report environmental and social funding.

‘Positive’ Start | Talks to revive Iran’s 2015 nuclear deal with world powers began positively Monday, according to a top European diplomat. Success in Vienna could lift sanctions on Iran’s economy and have major repercussions for oil markets and Middle East security. But U.S. officials remain pessimistic about striking an accord with Iran’s hardline government elected this year.

Elected Again | Sweden’s Social Democrat leader narrowly won a vote in parliament to re-elect her as prime minister yesterday, easing the political turmoil in the largest Nordic nation that had led to her resignation. Having become Sweden’s first female prime minister last Wednesday, Magdalena Andersson resigned the same day when her junior partner in government quit following a defeat in parliament over the budget.

Laying Blame | With gas prices continuing to climb, the executive director of the International Energy Agency pointed his finger at the policies of producer countries, saying it's not the transition to a green economy that's at fault. That's a thinly-veiled reference to the likes of Russia and Gazprom, who have been slow to fill up storage facilities in the EU.

Shrinking Confidence | Economic confidence in the euro area slipped in November as consumers struggled with an inflation spike and resurgent coronavirus infections that turned the region into a pandemic hotspot yet again. A sentiment index fell to 117.5 in November from 118.6 the previous month. A gauge for consumers dropped to the lowest in seven months. 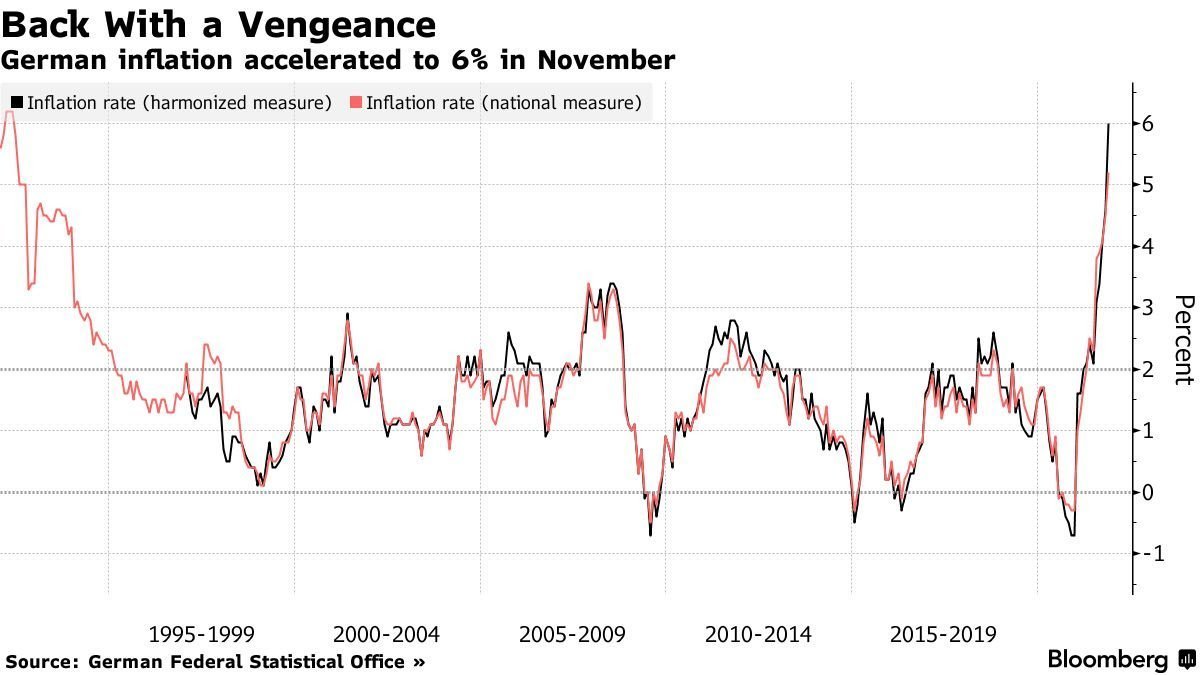 German inflation surged more than expected in November. Prices increased an annual 6% under a EU-harmonized measure. A national gauge rose to 5.2%, the highest since 1992. ECB Executive Board member Isabel Schnabel tried to assuage concerns yesterday, explaining in a TV interview that “November will prove to be the peak.”  However, another record was reached in Spain, where the inflation rate of 5.6% was also the highest value in nearly 30 years. Today, consumer prices for the entire euro area are expected to come in at 4.5%.

Today’s Agenda (All times in CET)

Cyprus Seeds mentors from the US visited Cyprus

Having a shared objective of research commercialization and collaborative approach, Cyprus Seeds and the Innovation Department of the CYENS Centre of Excellence organized recently mentoring sessions for the CYENS research teams interested to take their research from the lab to the market. This mentoring was offered, pro bono, by 5 CS experience mentors who visited Cyprus for one week on the invite of Cyprus Seeds. Both organizations support the commercialization and valorization of research results in Cyprus and believe that the Cyprus ecosystem can only grow and develop with solid collaborations between its key stakeholders.

The mentoring took place at the CYENS Centre of Excellence at the beginning of June 2022. It was organized as a part of Cyprus Seeds’ activities during the mentors’ visit to Cyprus. During their visit, the US mentors also met the Cyprus Seeds teams at their labs as well as CYENS researchers and innovation professionals and engaged with key stakeholders of Cyprus's research and innovation ecosystem including policy officials and private corporations.

Jonathan Green, George Mabry, Paul Blackborow and Karen Golmer are four of a number of US mentors who have been offering advice and coaching pro bono to Cyprus Seeds academic teams since the beginning of the 1st funding cycle of the program in 2019, they are all successful entrepreneurs with many years of research commercialization experience and relevant industry expertise.  Jonathan Green, the Managing Director at Arcadia Funds, a Ph.D. graduate from Stanford University, has more than 35 years of experience spanning a range of advanced technology and new business development. George Mabry, a Harvard MBA graduate and an MIT Ph.D. graduate, is a seasoned entrepreneur and senior-level executive. He helped build and lead the pre-eminent market research and consulting company in the pharmaceutical industry. Paul Blackborow has an extensive career in the technical sales and marketing of products used to manufacture semiconductor devices, particularly products that incorporate high-intensity plasmas. Karen Golmer, a recently retired Innovation Manager at the MIT Deshpande Center, has more than 35 years of experience in facilitating industry and university collaboration to advance new technologies, identify technical challenges, and find solutions to mitigate business risks. Leon Sandler, the Executive Director of the MIT Deshpande Center for Technological Innovation, was also in Cyprus and participated in all the activities organized by Cyprus Seeds.