On the sidelines of the Group of 20 summit last month, German Chancellor Angela Merkel warned her likely successor that the coronavirus pandemic might again require tougher curbs. But Olaf Scholz brushed aside the proposal, and Germany’s now suffering for it. Here’s our account of how a lack of leadership in Europe’s largest economy paved the way for another wave of the virus and threatens to cloud the start of Scholz’s tenure. Late last night, Merkel held an emergency meeting with Scholz and other leaders of the potential ruling coalition to discuss next steps, with nothing to show for it so far. In a similar haphazard fashion, leaders across the EU are scrambling to come to grips with the renewed spread of Covid-19. European affairs ministers meeting in Brussels yesterday called for rules as common as possible on booster shots and digital certificates, but stopped short of specifics, an EU diplomat told us. And Germany’s vaccine campaign is rattling back to life, with many snapping up online appointments for shots and others enduring hours of lines in the cold

Target Travel | The EU proposed a new legal tool to target travel and transportation companies that help smuggle people into the bloc, in an effort to prevent Belarus and other border countries from using irregular migration as a threat. Transport operators could face suspended licenses, limits on their European operations and a freeze on transiting through the EU.

Tech Rules | The European Parliament’s lead committee for writing new tech rules passed measures that could impact major U.S. and European companies. The draft Digital Markets Act could mean a ban on behavioral targeting of ads to minors, and fines of as much as 20% of a company’s global annual sales for breaches of the law.

Stronger Sanchez | Spanish Prime Minister Pedro Sanchez secured enough votes to pass his budget for next year. It’s a major win that cements political stability as he tries to bolster an economy slowly emerging from the pandemic.

No Game | There was some plain speaking from German Deputy Foreign Minister Michael Roth on the post-Brexit wrangle over the Northern Ireland Protocol. “Dear friends in London and in Britain, please come to your senses,” Roth said before talks with EU counterparts. He got some backing from Britain’s biggest business lobby group, which urged Boris Johnson’s government to make peace with the EU on the issue.

In Case You Missed It
Buyout Barons | Europe’s biggest telecommunications companies are finally abandoning their deal-making hesitancy. They may be too late to beat the kingpins of private equity. KKR has proposed a 10.8 billion-euro buyout of Telecom Italia in what would be one of the biggest private equity takeovers of a phone company ever.

Ship Sanctioned | The U.S. imposed sanctions on a ship involved in the construction of the Nord Stream 2 gas pipeline as the Biden administration looks to exert more pressure on Russia without antagonizing Germany. In a report sent to Congress, the administration designated Transadria, a Cyprus-based entity believed to be a Russian shell company, over pipeline work done by one of its ships.

China M&A | Chinese deal-making in Europe fell sharply in the last two years, according to a Commission report. China’s merger and acquisition transactions fell 63% in 2020 from the previous year and made up just 2.5% of all deals, compared with 4% the previous year. While 24 nations either have rules in place or are working on them, three EU states — Bulgaria, Croatia and Cyprus — haven’t announced any legislation to scrutinize outside investments.

Erdogan’s Mantra | The Turkish lira’s freefall shattered records as President Recep Tayyip Erdogan’s intensifying campaign for lower interest rates plunges the country deeper into crisis, triggering an unscheduled meeting between the president and his central bank chief. The latest collapse in the currency came after Erdogan defended his demands for lower borrowing costs that have driven up prices and frustrated investors. 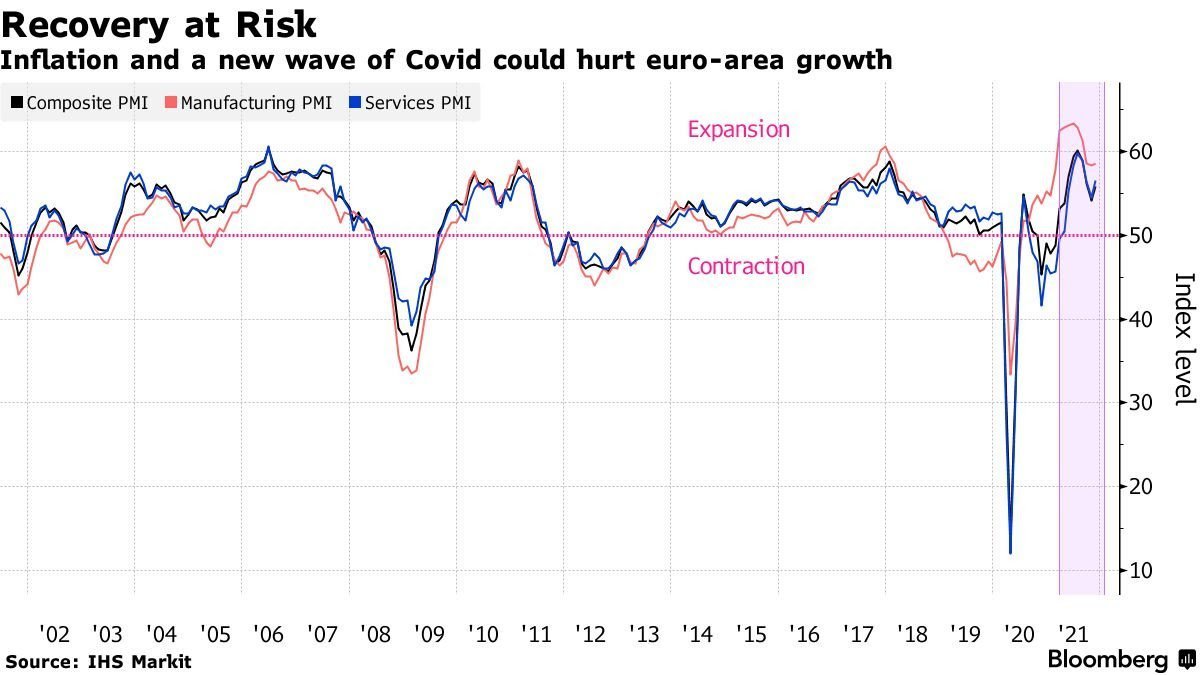 The European Parliament will elect a new president today after the death of David Sassoli last week. Among the candidates are three women, including the favorite, Roberta Metsola, the parliament's interim president. If elected, the member of the European People’s Party — parliament’s largest group — would become the body’s youngest leader and third woman to hold the post. The 43-year-old Maltese mother of four is an advocate of the rule of law and LGBTQ+ rights but is less progressive on abortion. Predominantly Roman Catholic Malta is the only EU country that doesn't allow pregnancy termination under any circumstances. In June, Metsola voted against a report recognizing sexual and reproductive health rights as fundamental human rights, including access to safe and legal abortion. Also in the running to preside over parliament are Spanish lawmaker Sira Rego of the Left group, Sweden's Alice Bah Kuhnke from the Greens/EFA Group and Kosma Zlotowski, a Polish member of the European Conservatives and Reformists caucus.

What’s Happening
Tax Push | EU members are skeptical that President Emmanuel Macron will be able to use France’s six-month presidency of the bloc to push for the rapid implementation of a minimum corporate tax. Sweden and Estonia are among countries warning that the EU’s timeline — with new tax structures in effect by next year — is too ambitious, we’ve heard. Finance ministers will discuss the issue today in Brussels.

Democratic Standards | The EU is preparing to cut billions in funds to member states that don’t uphold its democratic standards. The Commission may move as early as February, once the ECJ has ruled on the legality of the conditionality mechanism, we’ve been told. Poland stands to miss out on more than 130 billion euros from the bloc’s seven-year budget. Hungary could lose more than 40 billion euros.

Euro for Croatia | Croatia is drafting a law with the aim of adopting the euro in 2023. The country is “highly euroized,” Prime Minister Andrej Plenkovic told reporters in Zagreb yesterday. He reiterated the central bank’s plea for people to get their savings out of mattresses or drawers and into bank accounts to facilitate the transition.

Swift Russia | The U.S. and the EU are no longer considering the option of unplugging Russia from the Swift international payments system if it attacks Ukraine, German newspaper Handelsblatt reported. Nations involved believe that excluding Russia could destabilize financial markets in the short term. Instead, Washington and Brussels are weighing targeted penalties against major Russian banks after an aggression.

In Case You Missed It
Ukraine Crisis | German Chancellor Olaf Scholz said he expected the Kremlin to take steps to defuse tensions on the Ukraine border. He said any invasion would carry a “high price,” but stopped short of outlining what efforts his government might take if Russia attacks its neighbor. Estonian Prime Minister Kaja Kallas warned the EU and the U.S. about the risk of falling into a Russian “trap” in talks over the conflict.

Covid Commission | Jutta Urpilainen is self-isolating after testing positive for Covid-19 over the weekend. The EU commissioner suffered mild symptoms after returning from a trip to Germany and France, she said on Twitter. That’s also the platform Commission President Ursula von der Leyen chose to tell the world that she won’t be able to participate in the European Parliament’s plenary, after it turned out her driver has Covid.

Ecosystem Threat | The EU is endangering key global ecosystems like savannahs and peatlands by not including them in its deforestation law, according to the pressure group WWF. Producers of commodities like beef and soy may simply switch to other biodiverse regions — like the Cerrado savannah in South America — to avoid measures targeting the woodland loss the bloc is responsible for, it said.

Steel duties | The EU re-imposed anti-dumping duties on some grain-orientated flat-rolled silicon-electrical steel from China, Russia, the U.S. and Japan. Dumping “would be likely to continue” if duties were dropped, the EU reasoned. Duties on tartaric acid and bicycles originating in China will also be re-imposed.

Negative Danish Yields | Financial authorities said Danish banks probably aren’t breaching regulations with negative interest rates on deposits. Denmark’s bank regulator asked the EU to weigh in on the matter after the country’s consumer ombudsman said the rates were illegal fees. In a Jan. 13 letter, the Commission said it “leans” toward concluding rates aren’t fees and so aren’t subject to “reasonableness” criteria. The German economy, Europe’s largest, is still 2% smaller than in 2019, before the coronavirus pandemic halted activity and plunged the country into an unprecedented recession. Uncertainty over resurgent Covid infections and restrictions, an inflation surge and supply shortages mean private consumption remained nearly 6% below pre-crisis levels in 2021, while the gap for equipment investment exceeded 8%. Output shrank as much as 1% in the fourth quarter and is likely to contract again in the three months through March, putting the economy on track for a recession.