Angela Merkel’s efforts to broker a 100 billion-euro stimulus package for Germany continue today, as the two sides in the country’s ruling coalition struggle to bridge differences.

After an initial shot of stimulus and guarantees in March, officials are now focused on trying to bring the economy back from the deepest recession since the aftermath of World War II.

While the hurdles are still daunting, what’s looking increasingly certain is that after this crisis, Merkel will have ushered in a new era of state-led capitalism until recently unthinkable in Europe’s largest economy.

What’s Happening
More Action | ECB officials meet tomorrow with half their emergency bond-buying plan still unused, governments helping to tackle the economic crisis and markets showing relatively little sign of stress. But can they afford to delay action on boosting monetary stimulus until the summer? Economists and investors say: Probably not.

Global Condemnation | The death of an unarmed black man in the U.S. at the hands of police was  an abuse of power, the EU’s top diplomat said as officials across the continent voice concern at the unrest. The criticism comes as European diplomats struggle to avoid provoking Donald Trump while reflecting the outrage felt by many of their own citizens.

Air Corridors | Portugal said it’s in advanced talks with Germany over an “air corridor” for tourists and has started discussions with the U.K. as it seeks to attract visitors back to the country. The plans highlight the tricky balance that tourism-reliant nations will need to strike as they try to revive their economies and keep further outbreaks at bay. Germany, meantime, is planning today to announce the easing of European travel restrictions.

Some Hope | With negotiations this week with the U.K. not looking like they'll result in any breakthrough, the EU is pinning its hopes on convincing Boris Johnson to signal later this month where he could compromise. If he does, it could pave the way to a trade deal later in the year. But that's a big if.

In Case You Missed It
French Way | Closing a factory in France the best of times can test the mettle of an executive, given the country’s long record of industrial battles. But Renault may try to do it anyway, despite Emmanuel Macron’s twin resolves to save the local car industry and get the pandemic-wrecked economy back on track.

Exceptional Aid | The European Central Bank skewed asset purchases under its new emergency program toward Italy, buying 37.4 billion euros of the country's debt. The numbers underscore the institution’s crisis-fighting role and shine a light on how much more flexible the 750 billion-euro crisis program is compared to regular quantitative easing.

Curbing Big Tech | The EU is weighing new antitrust powers and has kicked off the legislative process for new rules to make platforms more liable for what users post to their sites. The Commission is seeking public feedback on its plans, which could change how tech giants do business.

G-7 Questions | Donald Trump’s proposal to invite Russia to a G-7 summit later this year was met with resistance by several members, while the EU’s foreign policy chief said the country has failed to earn a return to the group. But they’re not the only ones perplexed by the President’s intentions. The Kremlin, too, has “more questions than answers” about it.

Brussels Edition: Populism will be tested 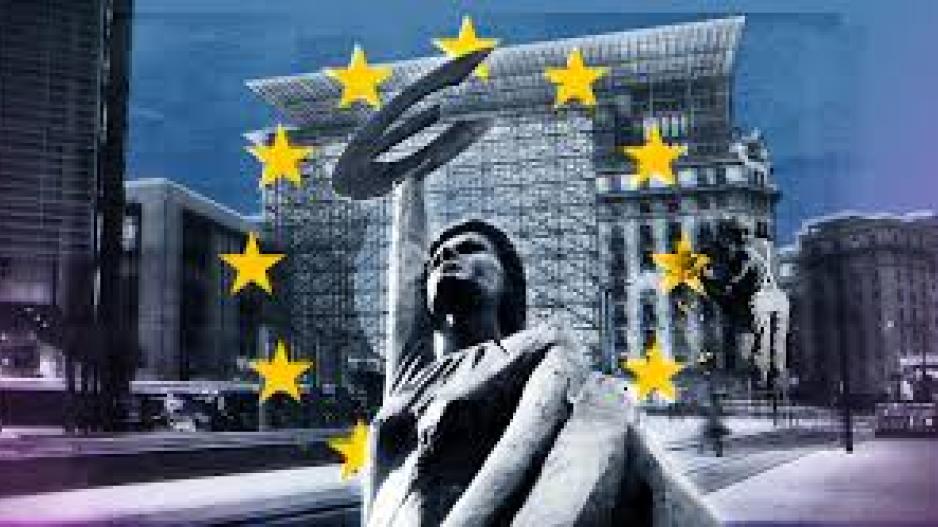 A month before Donald Trump launched his election campaign in June 2015, the Law & Justice party swept into power in Poland with a promise to kick out the “elites” and stand up to the EU. This weekend, President Andrzej Duda aims to secure a second term in a vote that not long ago looked like a done deal. But in a warning sign for populists across the EU and the Atlantic, the coronavirus pandemic and its economic fallout are changing the political calculus. Polls show Duda is neck-and-neck against Rafal Trzaskowski, the pro-EU mayor of Warsaw. Poland has much in common with Trump’s America, as the us-against-them rhetoric redrew the electoral landscape in both countries. Sunday's vote will decide whether the nativist remake of the EU's biggest eastern member will continue and may give us a hint about the fate of populism elsewhere in the world.

What’s Happening
Come In | The euro area is on course to expand, as Croatia and Bulgaria will enter the waiting room for the single currency. A statement from the ECB is expected after markets close today in a move that underscores the euro’s continued allure, despite repeated predictions of its demise.

New Order | Half-way into a year dominated by the pandemic, governments across the globe are confronting a health crisis, an economic crisis and a crisis of institutional legitimacy, all at a time of heightening geopolitical rivalry. How those tectonic shifts crystallize over the next six months could go a long way to determining the post-virus era.

Week ahead | EU leaders will gather in Brussels next week for their first in-person summit since February to try and strike a deal on a 750-billion euro recovery fund. But despite major pressure to come to an agreement quickly, nations remain deeply divided and diplomats are already looking at possible dates for another meeting, should this one fail.

Peace Talks | The EU will host a summit aimed at restarting a dialog between Serbia and Kosovo on Sunday in Brussels, adding to signs of renewed momentum in the efforts to resolve the Balkan dispute. The talks come as Serbia saw further unrest and banned large gatherings, while its president denounced violent protests against a plan to reinstate lockdown measures.

In Case You Missed It
Euro Boss | Paschal Donohoe upset the odds to win the race to become president of the informal but powerful Eurogroup that will help shape the region’s economic recovery. The result was a telling win for small countries, as Donohoe's opponent — Nadia Calvino — enjoyed the backing of the euro area's biggest economies.

Brexit Snags | The U.K.’s refusal to extend the Brexit transition period will add to obstacles facing virus-hit companies, the EU said as trade talks between the two drag on. The warning came as the bloc granted cross-border access to London’s crucial derivatives market, but cautioned that other swathes of the financial industry have a long way to go to secure post-Brexit agreements.

Trade Chief | The race is on to lead the World Trade Organization out of the worst crisis of its 25-year existence. Priorities for its next leader will be rebuilding the trust and credibility of the organization, rebooting its deadlocked negotiating agenda and restoring its paralyzed dispute-settlement system. Here’s a look at who’s in the running.

Josep Attacks | The EU's top diplomat accused the U.S. of laying waste to the multilateral order in what came across as yet another barely veiled attack on Trump. Josep Borrell has quite a reputation for straight-talking, but the comments highlight a general exasperation across the 27-member bloc at the “America First” agenda.

WHO's Fault | The World Health Organization named leaders of an independent panel to review its response to the pandemic. The move comes after the body came under fire for its response to the coronavirus outbreak, with Trump pulling the U.S. out of the group and saying that it’s too close to China. 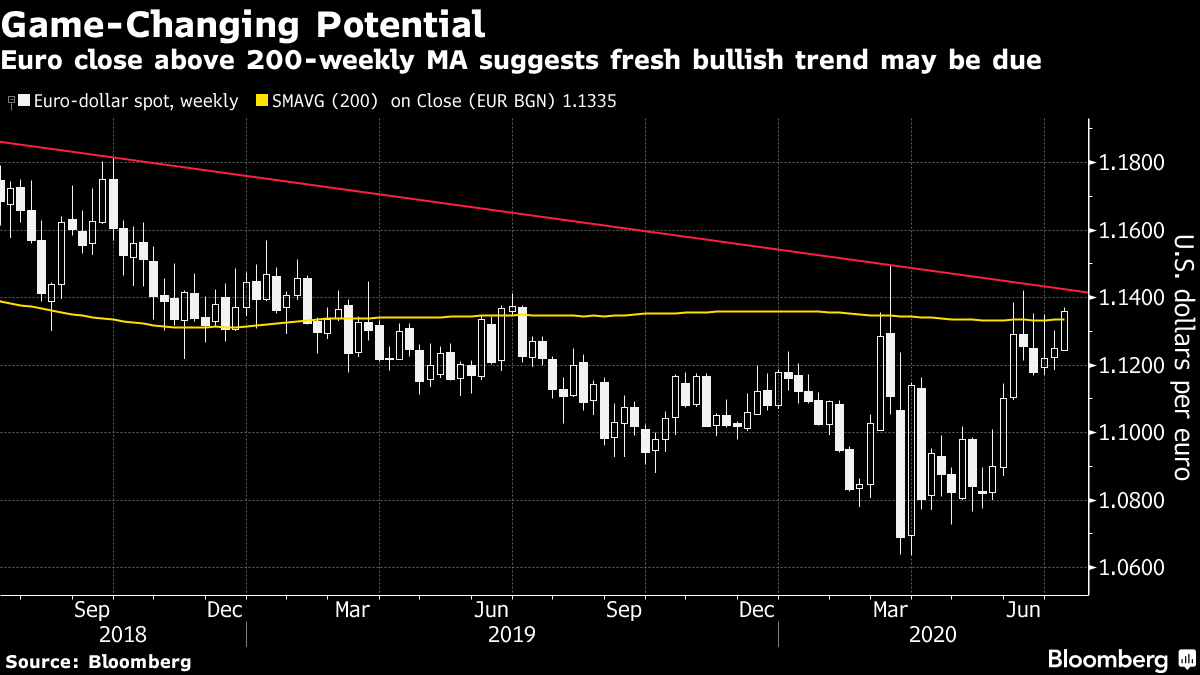 Regardless of what the spread of the coronavirus does to demand for risk, market indicators suggest the euro will rise. What’s driving the rally is optimism over the EU’s handling of the virus, including talks of a joint recovery fund, and governments’ relatively swift implementations of lockdowns. That stands in contrast to the pandemic response from across the Atlantic.