President of Cyprus Nicos Anastasiades attended on Wednesday a ceremony for the appointment of new Environment Commissioner Klelia Vasiliou and new Commissioner for the Development of Mountain Regions Costas Hambiaouris, asking them to cooperate closely with the rest of the government. Vasiliou served previously as Deputy Government Spokeswoman, while Hambiaouris  was the Minister of Education until the recent government reshuffle.

“I will be by your side, along with all Ministers” the President assured the two Commissioners at the ceremony, at the Presidential Palace, attended by Cabinet Ministers, state officials and several community council presidents.

Cooperation is essential in order to implement government decisions taken at the Ministerial level, but also in order for Commissioners to make their suggestions heard by the Ministries, the President added.

He said moreover that both offices are of crucial importance for the protection of the environment and in order to face modern challenges, while devising a strategy for the sustainable development of mountain regions.

The President also referred to EU warnings concerning the protection of the environment and the environmental impact of various developments projects on the sland. “There is a lot that needs to be done in relation to the environment” he said, adding that the Environment Commissioner and the Ministry of Agriculture will coordinate action in order to handle the issues raised by the European Commission.

“There are no enemies of the environment” Vasiliou said in her speech, adding that some people need to understand that environmental protection is not a hindrance to growth and that development is no enemy to the environment.

Hambiaouris thanked the President for his appointment and praised the work of his predecessor, Yiannakis Papadouris, who resigned recently. He said that he will make every effort to successfully and adequately perform his new duties.

Klelia Vasiliou succeeds Ioanna Panayiotou, who served as Environment Commissioner for the past seven years. Speaking later at the handover ceremony, Panayiotou said that she worked hard and consistently to further environmental protection and citizens’ health and quality of life issues. As Hambiaouris explained, Papadouris did not attend the handover ceremony as he was abroad. 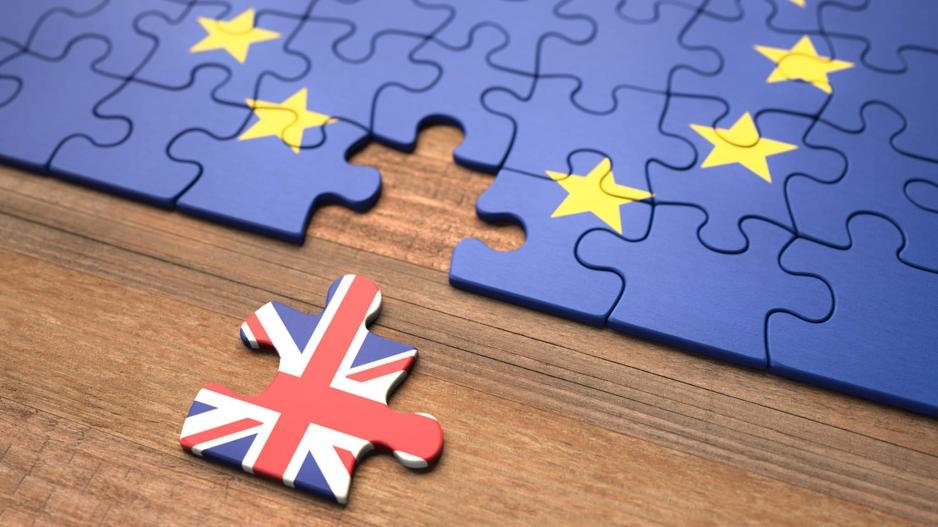 The Brexit deal is less than two years old, and the EU and the U.K. are trading threats to end it. With the EU planning contingencies if Boris Johnson’s government pulls out of the pact governing trade with Northern Ireland, we’re told one option is that Brussels could weigh terminating the whole post-Brexit trade agreement. Such a decision would require the backing of all 27 EU governments and would lead to a cooling-off period before tariffs, quotas and other barriers to trade kick in. Despite such threats, substantive negotiations have been quietly taking place and a European Commission team will travel to London tomorrow. On a parallel track, France will decide over the coming days on possible actions if its fishermen don’t get access to U.K. waters in accordance with Brexit.

What’s Happening
Price Hikes | Energy ministers will hold an emergency meeting in Luxembourg tomorrow to discuss the worsening energy crunch. The EU’s gas tanks are around 77% full, well below normal for this time of year. If the shortages worsen, European governments could resort to curbing sales of natural gas and power to other regions.

No Raise | The prospect that Europe’s surging inflation could stoke pay raises is being put to the test in the region’s largest economy as 3.5 million Germans in the public sector struggle to secure significant increases in wage talks. A new round of negotiations on Nov. 1 will help show if the post-crisis landscape has changed the dynamics, but the evidence so far doesn’t favor the workers — read more.

Covid Redux | Rising infections in EU member states have triggered governments to consider counter measures, particularly in the east. Now, Austria has laid out a framework for potential new lockdown measures to apply only to unvaccinated people. And today, the Belgian cabinet will meet to consider tighter curbs like stricter mask rules.

Italy Request | Italy is set to ask the EU for more time to find a buyer for Banca Monte dei Paschi di Siena SpA, after efforts to sell the troubled Tuscan lender to UniCredit SpA fell apart over the weekend. The time limit — set to expire at year’s end — was a condition for the EU’s blessing of the previous bailout of the bank, which was nationalized in 2017.

Berlin Suspense | Germany’s guessing game on who will succeed Jens Weidmann as Bundesbank chief could last longer than usual as talks begin on forming an unprecedented coalition. Here’s a closer look at the decision awaited from Berlin.

In Case You Missed It
China Trade | Olaf Scholz, expected to be Germany’s next chancellor, has credentials as a China enthusiast, but he has maintained a strategic ambiguity on what his policy toward Beijing might look like as tensions between the U.S. and China spill over into global supply chains. Ground zero for that debate is the port of Hamburg, where half of Germany’s $200 billion-a-year trade with China passes through.

Glasgow Carbon Deal | Nations are edging toward a deal that could create a global carbon market when they meet in Scotland for COP26 climate talks starting Sunday, after Brazil signaled it’s willing to compromise. The country softened its stance on Article 6 of the Paris Agreement, which aims to create a framework for countries and companies to meet their climate goals by trading carbon credits.

Kurz Down | The number of Austrians against former chancellor Sebastian Kurz’s return to power in the near future outpaces those in favor by more than three to one, according to a survey done for Profil magazine. Only 22% hope for his come back in the short term. Kurz, a rising star in European conservative politics, was forced to resign earlier this month after being named in a corruption probe.

Party Ban | EU diplomats have been banned from attending most social events at the COP26 climate change talks due to a surge in Covid-19 cases in the U.K. Guidelines have been issued for socializing in order to prevent the spread of infections, officials told us. The bloc’s diplomats will be allowed to attend only crucial events at the conference. 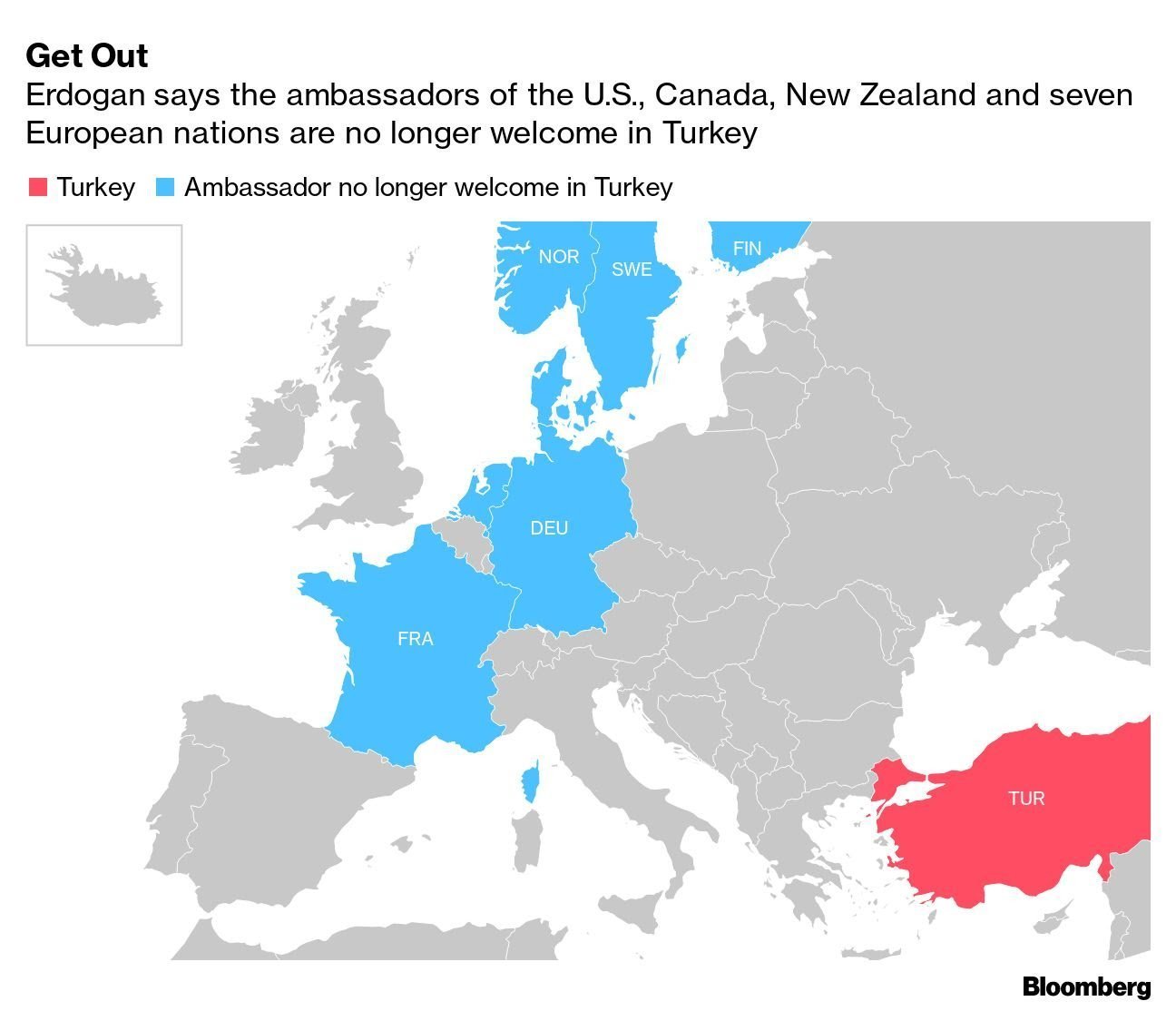 Ambassadors of 10 foreign nations, including six EU members and the U.S., are no longer welcome in Turkey, President Recep Tayyip Erdogan said on Saturday. The Turkish president’s move followed a joint statement of the envoys, including those of Germany and France, calling for Turkey to release prominent businessman and philanthropist Osman Kavala. Erdogan’s decision, which coincides with opinion polls suggesting his support base is eroding as the cost of living soars, may come with unwanted consequences for the struggling lira, which fell to a record low.