The 5 recipients of this year’s CFO Awards 2020

EY has once again proudly sponsored and presented the CFO Management Forum, an event addressed to CFOs and Finance Directors, as well as all other business executives involved in the finance function of their organisation. This year, due to the radical changes on social interactions brought by COVID-19, the event took place digitally, on Tuesday, September 15th.

The Forum, organised by IMH, was attended by more than 300 chief financial officers and other key executives from companies of all sizes and sectors operating in Cyprus, as well as government representatives and officials.

Speakers at the event included high-calibre finance professionals from the public and private sectors, who discussed the evolving role and new challenges facing the modern CFO, and the far-reaching changes in the world of finance in 2020 and beyond.

Representing EY, Stavros Pantzaris, Chairman of EY Cyprus, discussed the mandate of the strategic CFO, and Christophe Kasolowsky, EMEIA Financial Services CFO Consulting Leader from EY UK, talked about the finance function of the future and how the CFO will become the Chief Value Officer. Other issues discussed by the local and international speakers included the role of the CFO in the COVID-19 era, dilemmas of a modern CFO, the reinvention of the finance function through digital transformation, and the impact of sustainability on the CFO’s role.

Stelios Demetriou, Partner and Head of Strategy and Transaction Services of EY Cyprus, who was the Chairman and moderator of the Forum, commented: “The CFO role is rapidly evolving, at a time when companies are becoming increasingly connected and heavily scrutinized, with investors and society expecting greater transparency and enhanced corporate governance. The adverse economic impact of COVID-19 has further amplified the need to reengineer financial management, as well as reconsider investor fundamentals. CFOs are also becoming more heavily involved in strategy development and driving growth of their organisations. They are required to design integrated and all-inclusive financial strategies, addressing different angles and dealing with the challenges of the new normal. Digital transformation has become a cornerstone and is evolving at an ever-faster pace.  All the above create the need for a completely new skillset to stay relevant and resilient, as well as the ability to offer prompt and innovative solutions to key business issues and developments.”

On the occasion of the Forum, the 4th CFO Awards were presented to distinguished professionals from the Cypriot world of finance, in recognition of their contribution, achievements and professional excellence in the field of financial management.

The recipients of this year’s Awards are:
1.    CFO of the year Award: Eliza Livadiotou, Finance Director at Bank of Cyprus 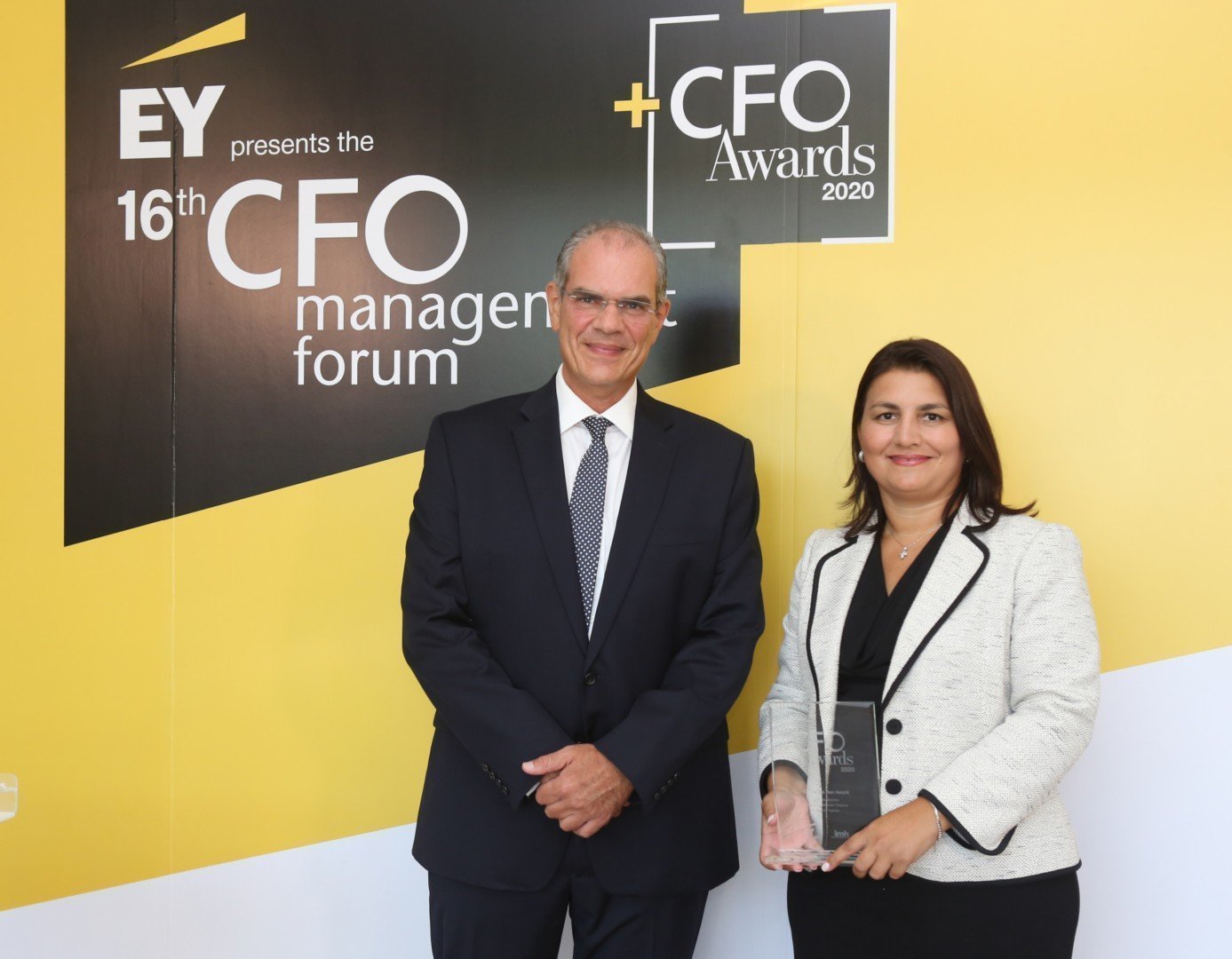 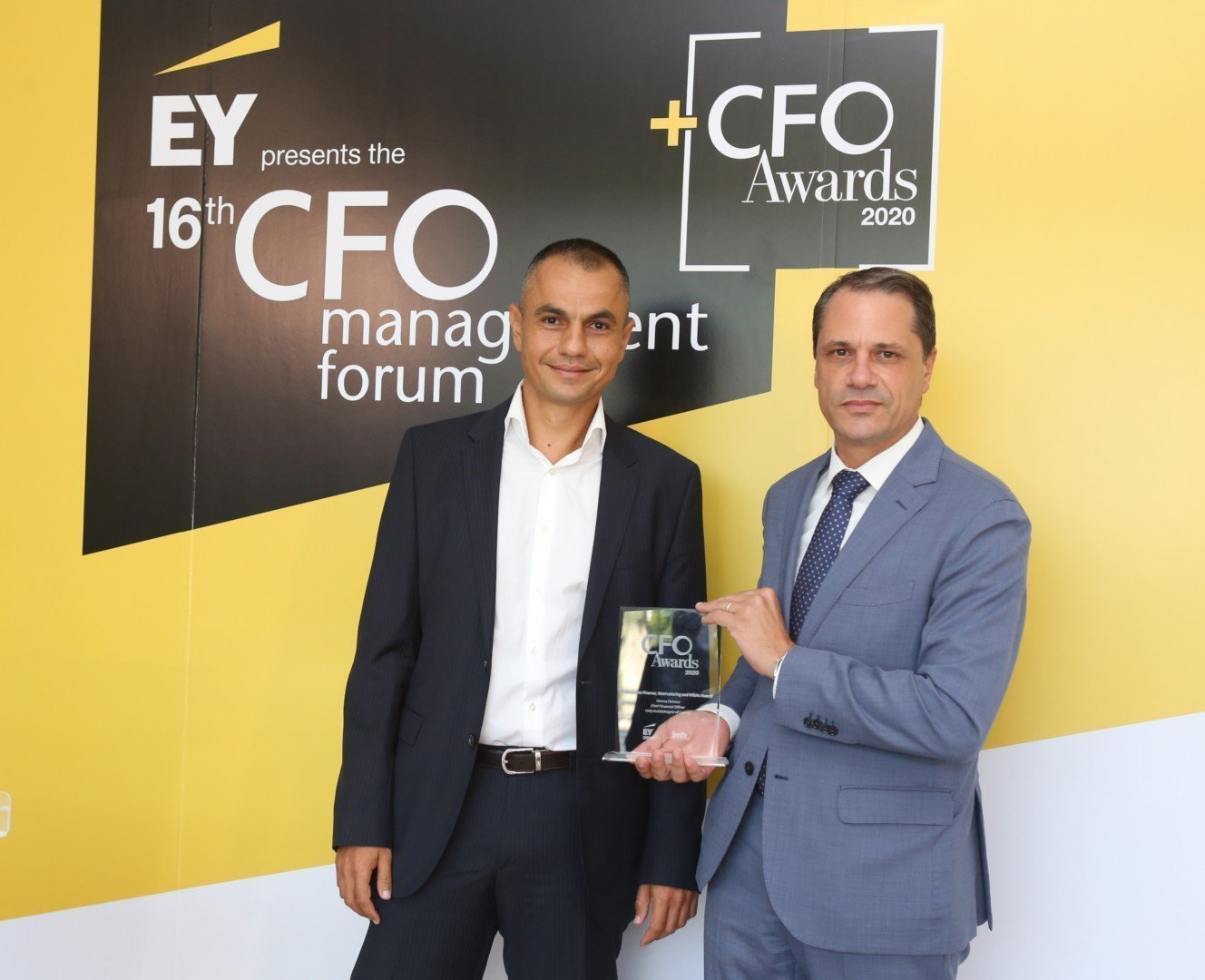 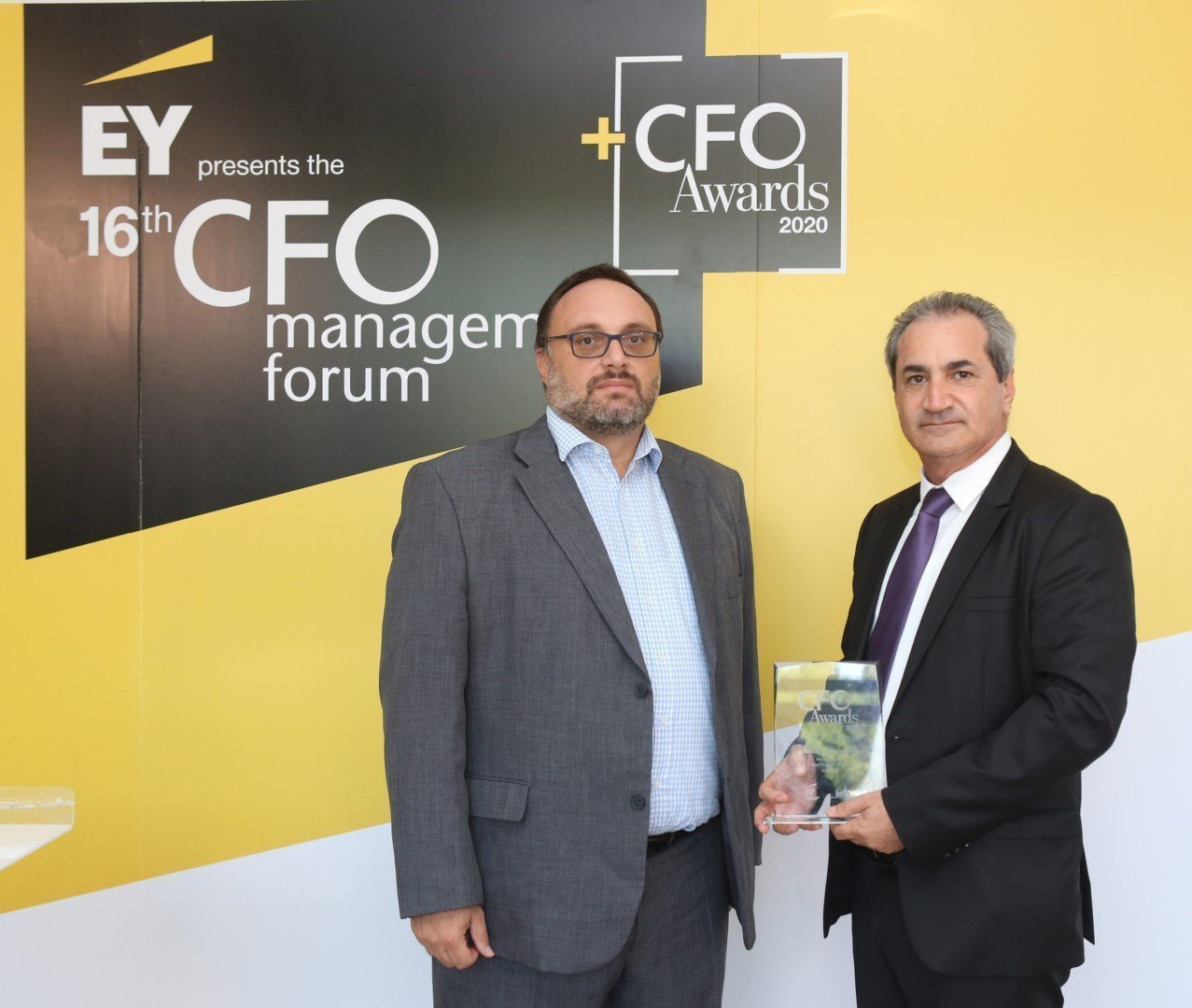 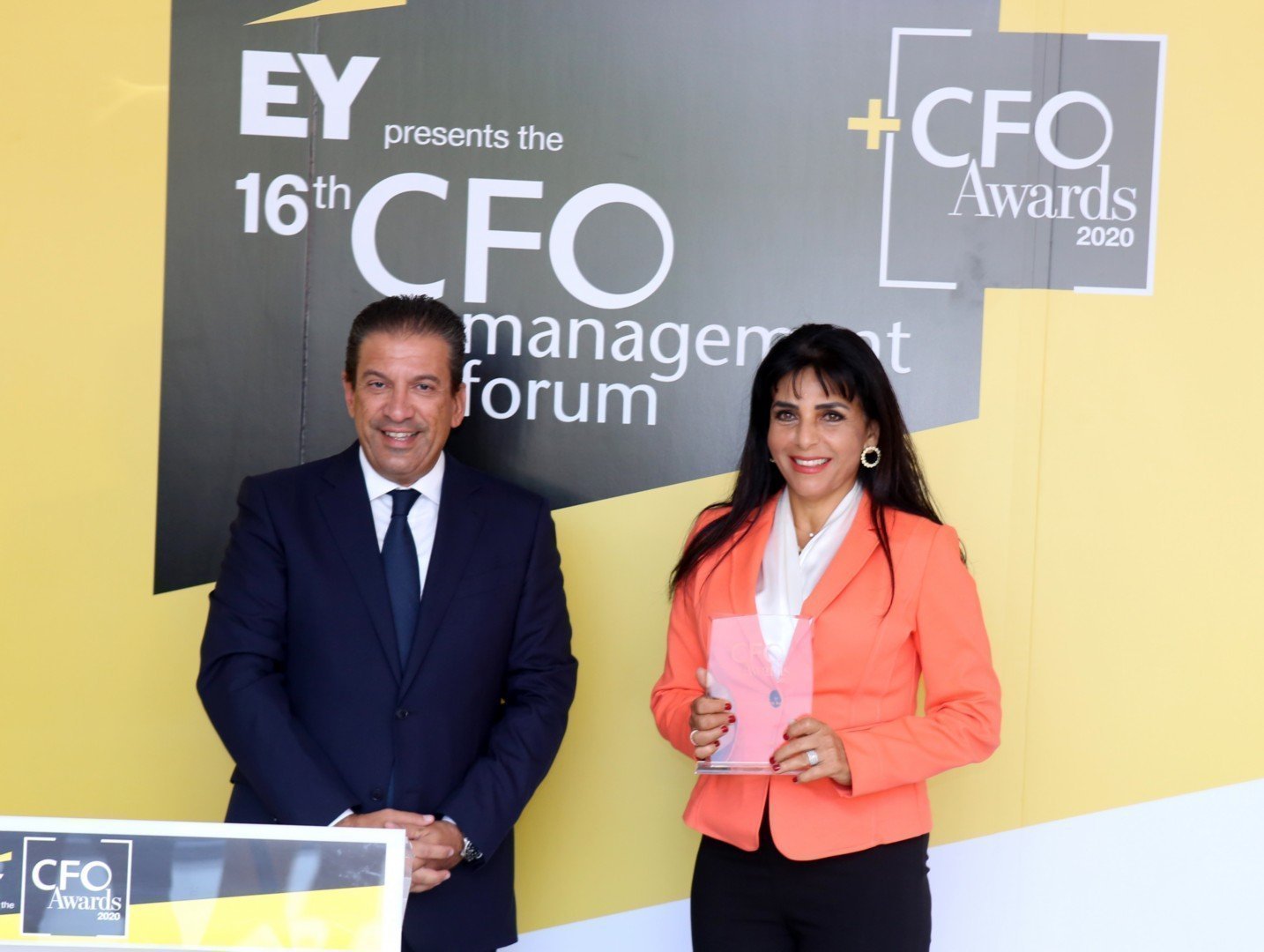 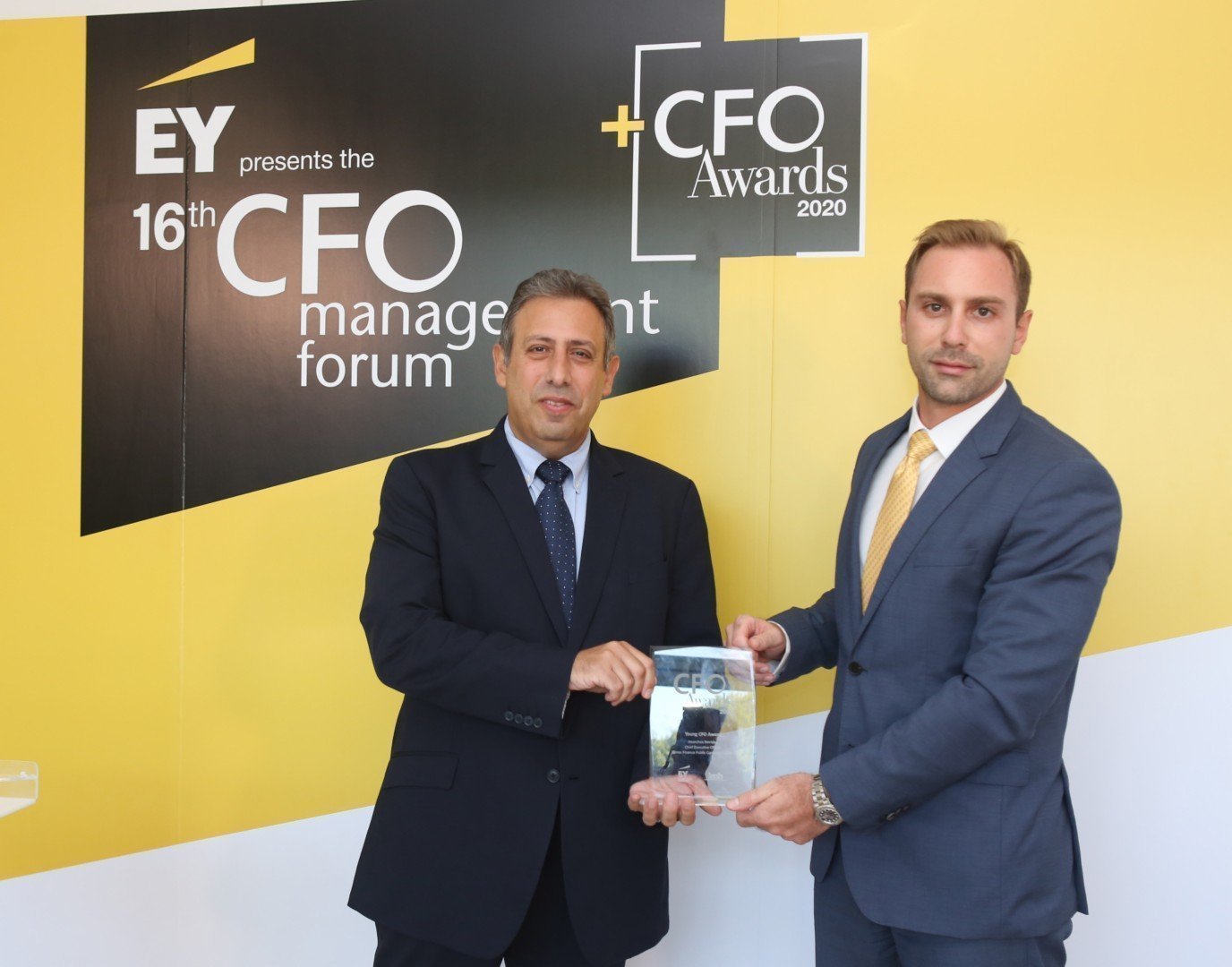 About EY
EY | Assurance | Tax | Strategy and Transactions | Consulting
EY is a global leader in assurance, tax, strategy, transaction and consulting services. The insights and quality services we deliver help build trust and confidence in the capital markets and in economies the world over. We develop outstanding leaders who team to deliver on our promises to all of our stakeholders. In so doing, we play a critical role in building a better working world for our people, for our clients and for our communities. 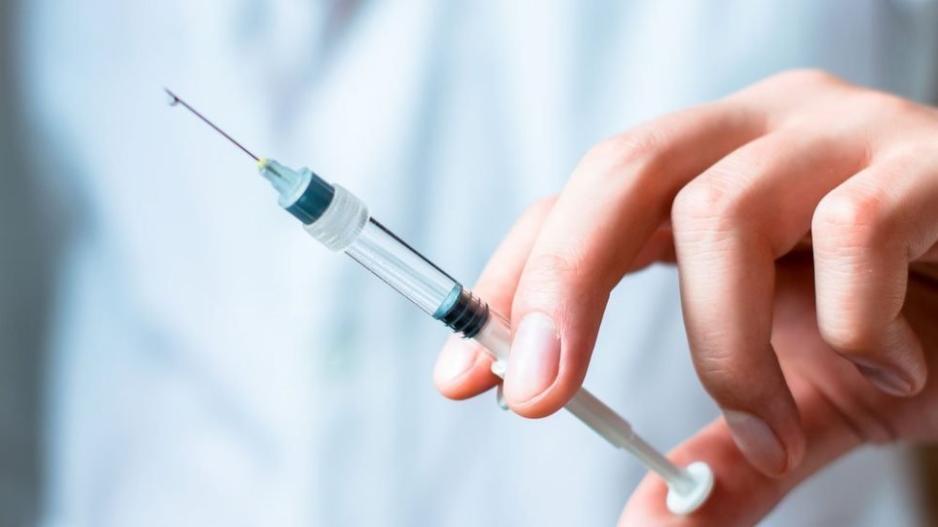 The European Commission will today call on member states to scale up their ambition in the fight against the pandemic by setting a target of vaccinating at least 70% of the EU’s population by summer. According to the draft of its latest recommendations that we’ve seen, the bloc’s executive will also endorse Greece’s proposal for a “vaccination certificate” that’ll allow those who get the jab to travel. For the rest of us, all non-essential journeys should remain off limits for the foreseeable future, the Commission will say. Beyond that, the “communication” is filled with vague pledges to help boost vaccine production capacity and asks member states to do more genome sequencing to track potentially dangerous mutations. Useful as such pledges and targets may be, they can’t overcome government inefficiency in administering vaccines. And on that front, the EU’s performance so far leaves much to be desired. - Nikos Chrysoloras and Viktoria Dendrinou

Euro Boost | The Commission will today outline how the EU could strengthen its economic resilience including bolstering the international role of the euro. The timing, a day before Joe Biden’s inauguration, may be somewhat awkward. But the push reflects growing calls to adopt tools that will allow the EU to pursue its foreign-policy goals with less recourse to unpredictable allies.

Travel Woes | Travel companies have for months been looking toward a rush of Covid vaccine introductions in early 2021 to rescue their battered industry. But European airlines counting on a bumper summer season to restore revenue and rebuild balance sheets are becoming fearful that a recovery will arrive too late.

Virus Update | The WHO said the world is on the brink of a “catastrophic moral failure” by allowing younger, healthier adults in rich countries to become vaccinated before health workers and old people in poorer ones. German Chancellor Angela Merkel and state leaders appear likely to extend and tighten lockdown measures, while the U.K. may begin to relax restrictions in the first half of March. Here’s the latest.

Conte's Vote | Italian Prime Minister Giuseppe Conte last night won a crucial confidence vote, after lawmakers backed his governing program amid a deepening rift within his coalition following the defection of a party headed by ex-premier Matteo Renzi. While the favorable result was widely expected, Conte is set to face a similar vote in the Senate today, where his majority is razor-thin and the outcome more uncertain.

Bond Overload | After a blockbuster start to the year for euro-area bond sales, a barrage of EU debt risks cannibalizing future demand for its member countries. The bloc is due to launch its first bonds of the year this week, after its initial social debt sales in 2020 drew record bidding.

Norway Deaths | Health authorities in Norway say there’s no evidence of a direct link between the recent string of deaths among elderly people inoculated against Covid-19 and the vaccine they received. The clarification came after initial reports made international headlines as the world looks for early signs of potential side effects from the shots.

Troubled Talks | The EU has threatened to hit Turkey with real sanctions over its Mediterranean maritime claims, but it hopes to avoid such an uncomfortable situation if talks starting next week between Ankara and Athens go reasonably well. Trouble is, Greece and Turkey can’t even agree on what exactly they should talk about, our dispatch shows.

Funding Gap | The EU needs to find new ways to recapitalize businesses so that the hole on corporate balance sheets doesn’t derail the recovery, according to a financial-industry group. Companies face an equity shortfall of as much as 600 billion euros, the Association for Financial Markets in Europe said.

Permit Prices | Sixteen years ago, Europe introduced a new market based by issuing companies credits to pollute up to a certain level and allowing them to buy or sell them as needed. When the global economy went into a funk in 2008, emissions plummeted, sending permit prices into a tailspin. Now, after reforms that reduced the number of available permits, Europe’s Emissions Trading System is back on track. Here’s why.

Russia Tensions | A Russian court ordered opposition leader Alexey Navalny jailed for 30 days, defying U.S. and European calls to free him. The activist faces as much as 3.5 years in prison. His detention came after many EU leaders called on Moscow to immediately release him and ensure his safety, and risks a new round of tensions with the West. 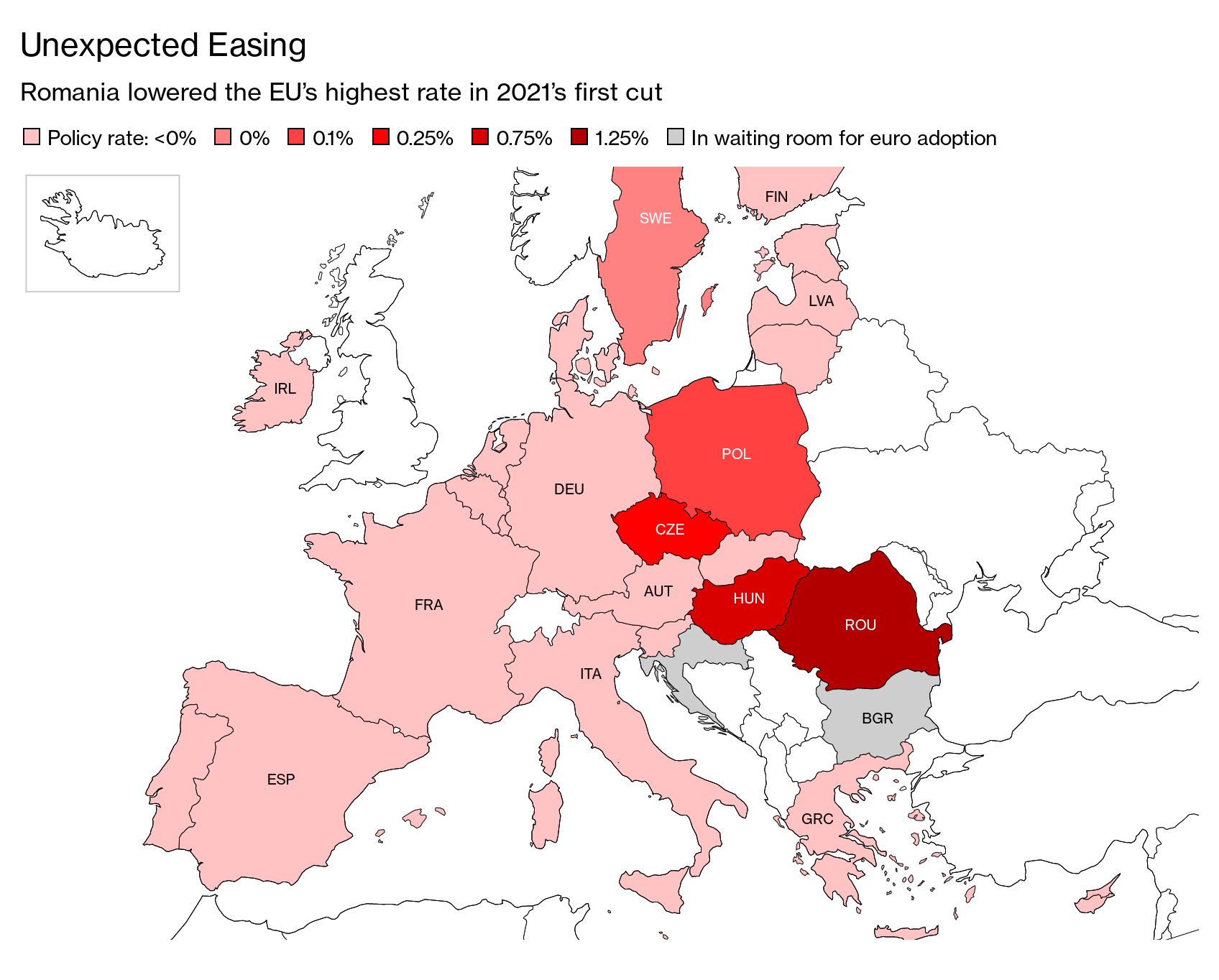 Romania unexpectedly lowered borrowing costs to provide further support to its coronavirus-stricken economy, giving the world its first rate cut of 2021. The central bank reduced the benchmark to a record low of 1.25% at an unscheduled meeting on Friday, the fourth reduction since the pandemic took hold. That still leaves Romania’s rate higher than any other in the EU.