This is the third consecutive illegal drilling since May 2019, when another Turkish drilling vessel, namely the Fatih

Cyprus has protested to the UN Turkey`s continued illegal behaviour against Cyprus in terms of hydrocarbon exploration and military activities, requesting the UN Secetary - General "to call upon the Government of Turkey to comply with international law, respect the sovereignty, sovereign rights and jurisdiction of the Republic of Cyprus and refrain from any actions that endanger international peace and security and are counterproductive to our efforts to resume negotiations for the reunification of Cyprus."

In a letter dated November 13, 2019, the Permanent Representative of Cyprus to the UN, Andreas Mavroyiannis, informed the UN Secretary- General that Turkey continues its illegal behaviour, escalating its provocative and unlawful actions against Cyprus, in terms of both hydrocarbon exploration and military activities.

Δείτε επίσης:
Mavroyiannis expresses cautious optimism over Cyprus problem
Mavroyiannis in New York for contacts ahead of vote for UNFICYP

In particular, he added, in early October 2019, Turkey, through the state-owned Turkish Petroleum Company, deployed its drilling vessel the Yavuz within the EEZ/continental shelf of Cyprus, in offshore exploration block 7, which has been licensed by the Government of Cyprus to European oil and gas companies (Total and Eni).

The drilling point lies just 44 nautical miles from the coast of Cyprus, within the EEZ/continental shelf of Cyprus, which has already been delimited, in accordance with international law, between the relevant opposite coastal States, namely the Republic of Cyprus and the Arab Republic of Egypt, by means of the EEZ delimitation agreement of 2003. The said drilling operations are planned to continue until 10 January 2020, as set out in an unauthorized navigational warning issued by Turkey, Mavroyiannis noted.

He went on to say that this is the third consecutive illegal drilling since May 2019, when another Turkish drilling vessel, namely the Fatih, commenced its operations in the EEZ/continental shelf of Cyprus, at a distance of about 36 nautical miles from its western coast. Mavroyianis recalled that the above-mentioned vessel, the Yavuz, which is now positioned in exploration block 7 of the EEZ/continental shelf of Cyprus, had previously completed another such drilling within the territorial sea of Cyprus, approximately 10 nautical miles from the north-eastern coast of the island Karpas, infringing the sovereignty of the Republic of Cyprus.

Cyprus` Permanent Representative Mavroyiannis said that according to international law, the establishment of installations and structures on the EEZ/continental shelf falls within the ambit of the coastal State’s exclusive rights and jurisdiction. Consequently, the deployment of both aforementioned drilling vessels in the EEZ/continental shelf of Cyprus is in breach of articles 56 (1) (b) (i), 60 and 80 of the United Nations Convention on the Law of the Sea, which form part of customary international law and thus are also binding on non -parties to the Convention, including Turkey, he added.

He recalled that since July 2019, Turkey has also conducted three additional hydrocarbon exploratory seismic surveys within the EEZ/continental shelf of Cyprus, reiterating that these activities by Turkey are in violation of the sovereign rights of Cyprus in its
EEZ/continental shelf, in accordance with the pertinent rules of the United Nations Convention on the Law of the Sea and customary international law.

Mavroyiannis said that in addition to the extensive hydrocarbon exploration campaign pursued by Turkey around the whole island of Cyprus, it is deeply concerning that the military forces of Turkey have surrounded the island, either in escort of the exploration vessels or in conduct of military exercises.

In addition, he added, there is an alarming increase in the use of unmanned aerial vehicles, both armed and unarmed, the competent authorities of Cyprus having reported 144 such flights since July 2019. Those flights constitute an infringement of international air traffic regulations (and, in some cases, violations of the national airspace of Cyprus) and place an additional security burden on the Nicosia flight information region, Mavroyiannis noted.

He stressed that Turkey’s overall militarization of the maritime zones of Cyprus constitutes not only a serious violation of applicable international law but also an abuse of the freedom of navigation, violates the principle of the peaceful uses of the seas, endangers the safety of navigation and poses an overall threat to international peace and security.

"Turkey’s illegal activities in the maritime zones of Cyprus not only run contrary to applicable international law, but, as exemplified by the ongoing drilling operation within a duly delimited maritime area between Cyprus and Egypt, constitute yet another attempt on behalf of Turkey to challenge one of the core attributes of the Republic of Cyprus as a sovereign and independent State and member of the United Nations, namely its capacity to conclude international agreements with its neighbours for the delimitation of their respective EEZs," Cyprus` Permanent Representative said.

He noted that by doing so, Turkey, in essence, is challenging the very foundations of international law, including the Charter of the United Nations and the rules and principles governing the world order.

It is thus ironic, Mavroyiannis went on, that Turkey claims that its actions in the maritime areas around Cyprus are “in accordance with international law”, as one of the very few States in the world that has neither signed nor acceded to the United Nations Convention on the Law of the Sea and the only State that, every single year, votes against the General Assembly resolution on the law of the sea.

He added that moreover Turkey refuses to enter into negotiations with Cyprus in order to delimit our maritime zones, as predicated by the rules of international law, despite my Government ’s invitation to that effect, which was welcomed by the European Union.

Having not accepted the jurisdiction of any international adjudication mechanism, including the International Court of Justice,
Turkey has, in effect, conveniently excluded itself from any international dispute settlement mechanism where its assertions can be put to the test, Mavroyiannis noted.

Cyprus has been divided since 1974, when Turkey invaded and occupied its northern third. Repeated rounds of UN-led peace talks have so far failed to yield results. The latest round of negotiations, in July 2017 at the Swiss resort of Crans-Montana ended inconclusively. 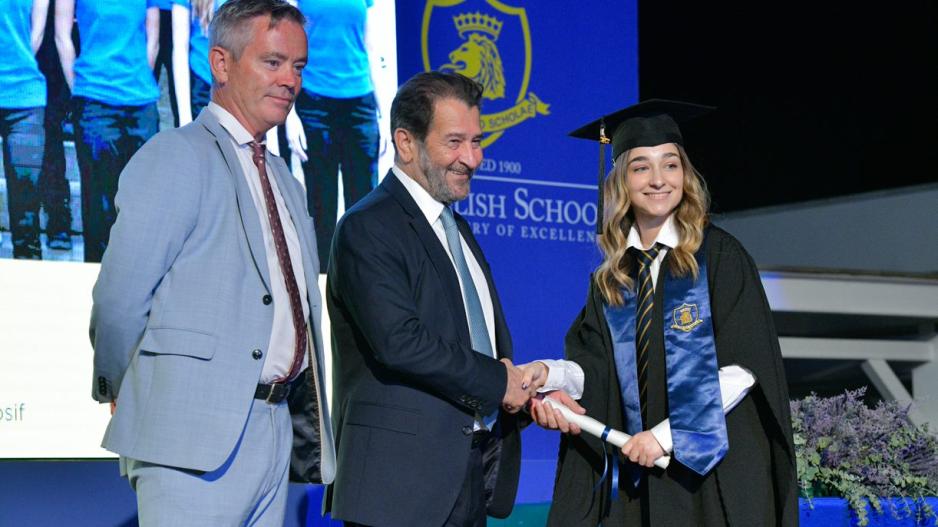 The English School Leavers of 2022 will be moving onward in their academic journeys, having graduated from the institution that has been their home for the past seven years.

At the ceremony held on Saturday, 25 June, the new graduates were addressed by their Headmaster, David Lambon, the Chairman of the Board of Management, Charalambos Iosephides, the Minister of Finance, Constantinos Petrides, and Guest Speaker Dr. Kypros Nicolaides, a graduate of the English School. A number of officials were in attendance, including the Mayor of Strovolos, Andreas Papacharalambous, and the Acting Director of Secondary Education, Mr. Nicholas Yiasoumi.

>> Read the announcement in Greek Language << 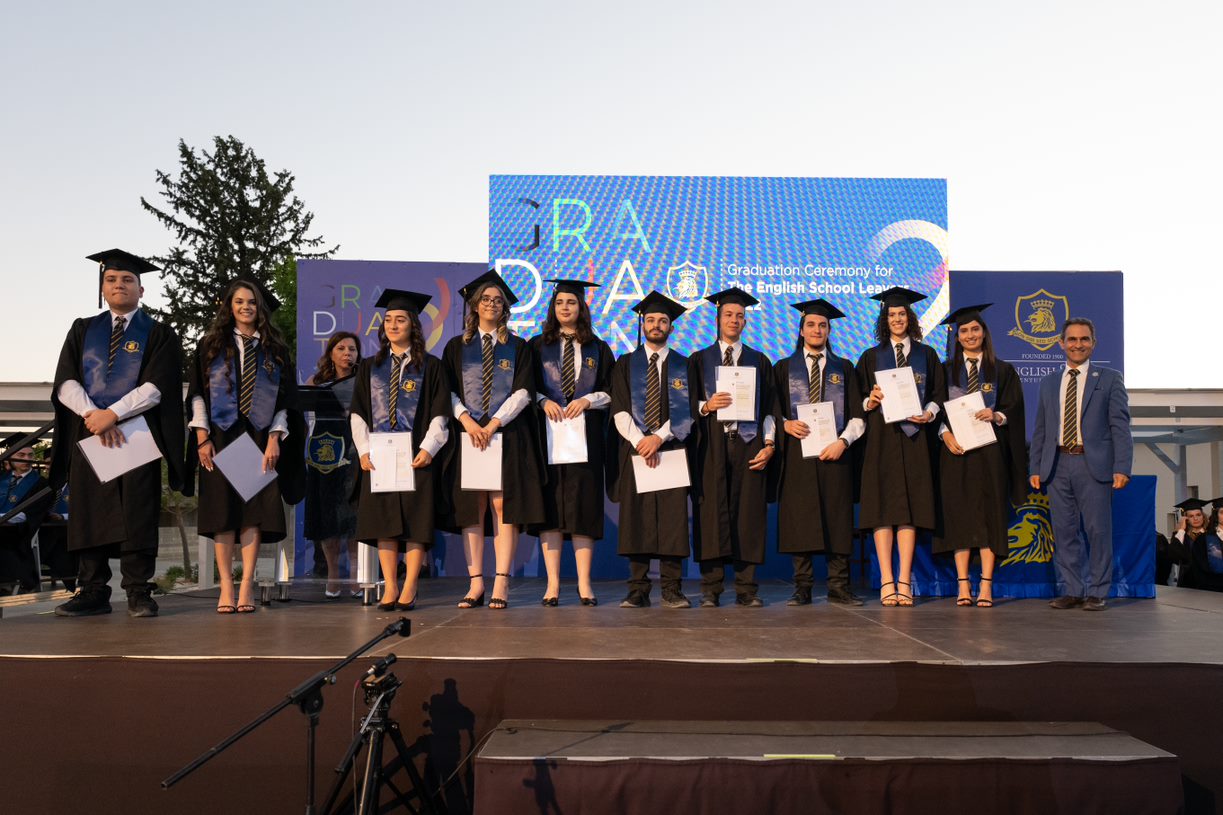 The students were congratulated on reaching this major milestone in their lives, having distinguished themselves along the way for their commitment, compassion, and leadership, which were nurtured and expanded during their time at the school, and will now serve as points of reference in their next steps.

A total of 154 students graduated from the English School this year, during the inspiring ceremony attended by their proud parents and guardians. Along with their diplomas, a number of graduates received academic excellence awards for achievements across a range of subjects, as well as awards for their outstanding contribution to debating and public speaking, music and orchestra, and sporting. In his Welcome Address, the Chairman of the Board of Management, Mr. Charalambos Iosephides, thanked the teaching and support staff, crediting them with enabling the students to realise their full potential, as well as the parents, for always championing the school and standing by their children and the Board in every step. Addressing the Class of 2022, Chairman Iosephides remarked: “To our graduates, on behalf of the Board of Management, I wish you the very best of success and happiness in your futures, whether your next immediate step is your university education, or your National Service. I am confident that the lessons you were taught at the English School, both academic and non-academic, have given you the tools to become respectful, respectable, and free-thinking citizens, and given you the confidence to hold your own in the new world into which you are now venturing”. 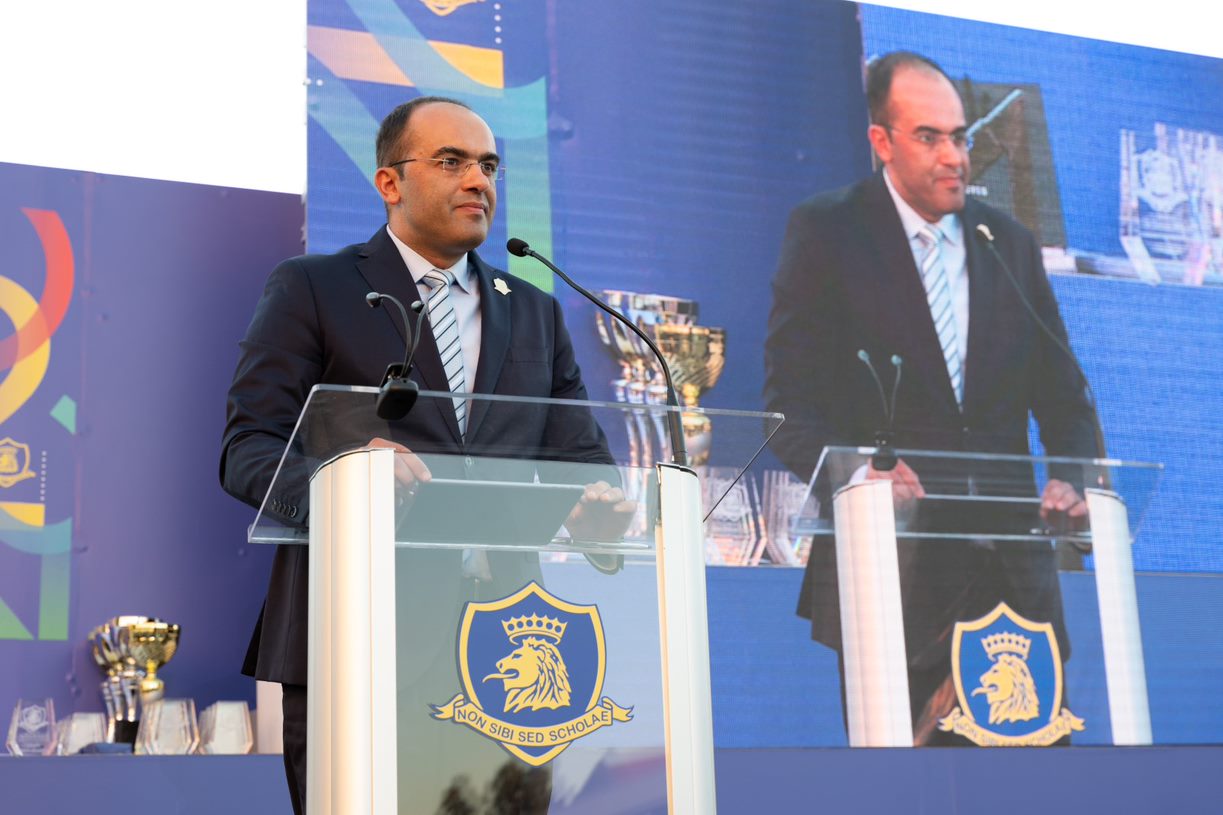 For his part, Headmaster David Lambon said: “For all of us, graduation is both a time of reflection and of eager anticipation for the exciting opportunities that our graduates will embrace in the coming years”. Welcoming Dr. Kypros Nicolaides “home”, Headmaster Lambon then touched upon the distinguished alumnus’ journey from being a boarder at the English School to professor of foetal medicine at King’s College Hospital in London. “His personal journey […] is one of commitment, compassion, and leadership”, he noted, underscoring that these qualities lie at the heart of the skills and values the graduates had developed at the school over their seven-year tenure. “I hope the commitment, compassion, and leadership you have developed at school will guide you in your future lives at university and beyond”, added Headmaster Lambon.

Addressing the graduating class of 2022, Guest Speaker and alumnus, Dr. Kypros Nicolaides, applauded their resilience and dedication: “I congratulate you for reaching this wonderful milestone in your life, especially so during the COVID pandemic, which may well have been one of the most difficult periods in a lifetime”. Moreover, speaking as a proud alumnus, he emphasised the enduring bond one carries with them post-graduation: “However many years pass, wherever you happen to be, you will always be proud to have studied at the English School”. 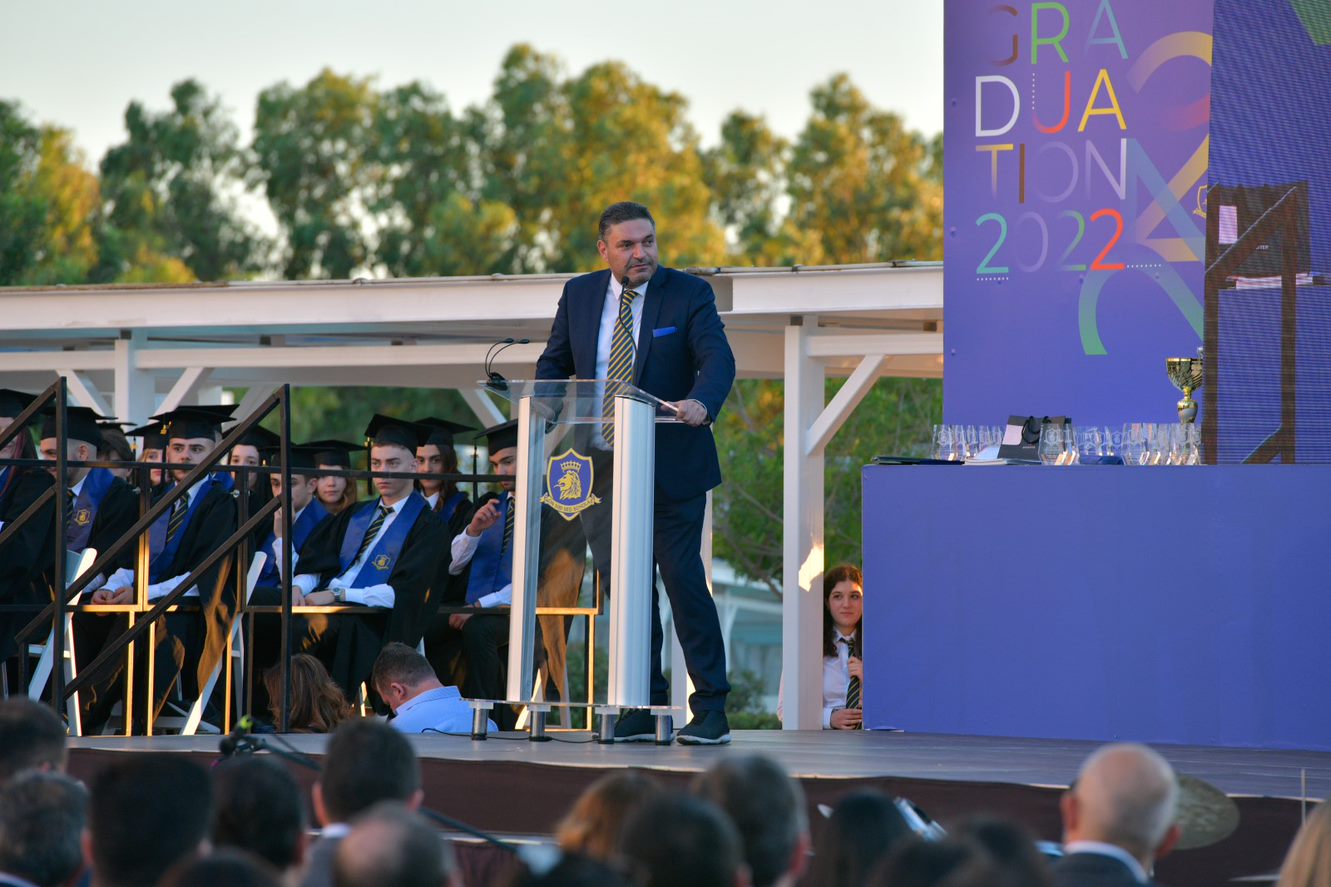 Dr. Kypros, as he is known, was visibly touched while delivering his speech, having returned to his alma mater fifty-one years after his own graduation in 1970. He spoke warmly about his time at the English School, touching upon the many things he had learned “at one of the best schools in the world”; including how to share and work with others, how to participate in debates, and how to develop an inquiring mind. Importantly, the School served as the vehicle through which he carried out experiments in physics, chemistry, and biology for the first time, the first traces of what would flourish into a dedicated and pioneering career in medicine.

Earlier in the day, the School’s Science Building was officially named in honour of the revered English School graduate, during a brief ceremony in which he was warmly applauded by the School’s science teachers and the Board of Management to Coldplay’s “The Scientist”. This is the first time that a building has been named in honour of a former student, with that distinction having previously been bestowed on the School’s founder and teacher.

Echoing the Guest Speaker, Finance Minister Constantinos Petrides noted how the English School stands apart in terms of the skills and resources it offers, enabling its students to utilise their full potential. “You should be proud of being part of this family, the English School Family”, underlined the Minister.

The English School, founded in 1900, stands as the oldest school of its kind outside the United Kingdom. The School began with 13 pupils but rapidly grew to become the premier English medium school in Cyprus, drawing its students from a range of cultural communities both locally and abroad.