Presidency:Turkey is turning into a pirate state in Mediterranean

The Government of Cyprus condemns Turkey’s newly planned illegal drilling within the EEZ and continental shelf of the Republic of Cyprus. Provocatively ignoring the repeated calls by the international community, and especially those by the European Union, to terminate its illegal activities in Cyprus’ EEZ, Turkey now attempts to conduct a new illegal drilling, this time in the southern EEZ/continental shelf of Cyprus, inside exploration block 8, which was duly licensed to the European companies ENI and TOTAL. This new attempted drilling constitutes yet another flagrant violation of the sovereign rights and jurisdiction of the Republic of Cyprus under the UN Convention on the Law of the Sea, as well as the relevant customary International Law, and completely disregards the international EEZ delimitation agreements already in force between Cyprus and Israel, and Cyprus and Egypt, respectively.

Turkey is turning into a pirate state in the Eastern Mediterranean. Against the backdrop of the emerging energy synergies in the region, amply demonstrated by the creation of the East Mediterranean Gas Forum in Cairo as recently as three days ago, as well as the signing two weeks ago of the EastMed Pipeline Agreement in Athens, Turkey insists on going down the path of international illegality it has chosen for itself.

With cynicism and hypocrisy, Turkey conducts its blatantly illegal activity in Cyprus’s EEZ/continental shelf purporting supposedly to act with the aim of protecting the rights of Turkish Cypriots, whilst at the same time claiming for herself 44% of Cyprus’ EEZ, to the detriment of the lawful rights of all Cypriots. Any assertions that the planned drilling is being conducted for the benefit of the Turkish Cypriots are groundless and any purported “licensing” by the so-called “TRNC” is illegal, null and void, as per the relevant UN Security Council resolutions and International Law. It is reiterated that the interests of the Turkish Cypriots are fully safeguarded through the pursued comprehensive settlement of the Cyprus problem, as attested by the relevant convergences achieved at the negotiating table and also by the proposals made by the President of the Republic.

The EU may be about to take its most concrete steps yet to tackle the energy crisis, but it’s already becoming clear that they won’t be sufficient. Ministers gathering today in Brussels are set to back emergency measures to cut power use and redirect windfall profits of energy firms to households and businesses. And the bloc has already agreed on a voluntary target to cut gas consumption by 15% after Russia, its biggest supplier, slashed shipments. But more action is clearly needed to contain the energy crunch that’s fueling inflation and threatening recession, and the bloc apparently isn’t yet ready to agree on what else to do. Ministers are poised for a clash over how and whether to cap gas prices, but they also need to avoid steps that could make it even harder for Europe to cut energy use and make it safely through winter.

Russian Annexation | Russia vowed to push ahead today with the annexation of the parts of Ukraine that its troops currently control after UN-condemned votes, putting the Kremlin on a fresh collision course with the US and its allies. Russia will sign treaties to absorb the four regions in eastern and southern Ukraine at a Kremlin ceremony, with Vladimir Putin set to make an address.

Truss Trip | Liz Truss will attend a new European political “club of nations” next week in Prague, we’re told. That may come as welcome distraction for the UK prime minister, who’s showed no sign of backing down on her economic policies that forced an unprecedented £65 billion intervention from the Bank of England.

London Decline | Although the pound has recovered, the crisis of confidence in UK assets is running so deep that the country is close to losing its crown of Europe’s biggest equity market. This year’s decline in London stocks has reduced the combined market capitalization of companies with a primary UK listing to within touching distance of its nearest challenger, Paris, according to data we crunched.

Big Hike | The ECB should raise interest rates by another 75 basis points when it next sets policy in October, with steps likely to get smaller after that, according to Governing Council member Martins Kazaks. It’s likely that once rates are more consistent with the central bank’s inflation goal, future steps “will need to become somewhat more cautious,” he added.

Maltese Passports | Malta faces a lawsuit at the EU’s Court of Justice for its investor citizenship scheme, often referred to as golden passports, which allow the wealthy to live and work in the bloc. The investment migration industry has proven lucrative for Europe, where participating member states netted more than €21 billion between 2011 and 2019 from individuals in return for passports.

Sapped Confidence | Euro-area economic confidence dropped to the lowest since 2020 this month as record inflation and the prospect of the first winter in a generation without Russian gas cast a shadow over the region. A measure of sentiment compiled by the commission fell to 93.7 in September, marking the seventh consecutive monthly decline.

Rich Tax | Spain announced plans for a new wealth tax as it continues to seek ways to raise funds to pay for social policies amid soaring inflation. The new levy will affect 23,000 people who have assets worth at least  €3 million a year for 2023 and 2024 and is expected to raise about €1.5 billion.  There will also be tax reductions for lower earners, worth about €1.88 billion over two years.

Finnish Visas | Finland will stop issuing tourist visas to Russians and plans to invalidate their tourist visas at the border, Foreign Minister Pekka Haavisto said. The decision comes into force today. The Nordic country cited potential harm to its international relations as a reason for the move, and said mobilization in Russia contributed to the decision.

Gas Guzzlers | Germany’s network regulator warned that households and companies used too much gas over the past week as temperatures dropped and said savings of at least 20% are needed to avert a shortage of the fuel this winter. Gas consumption was well above average, increasing by 14.5% compared with the mean for 2018-2021, it said.

Beer Fuel | Carlsberg has converted the brewery supplying beverages to its homeland of Denmark to run on oil instead of gas to avoid having to shut it down amid Europe’s escalating energy crisis. Danish authorities have this year included Carlsberg on a list of about 50 large gas users that won’t be protected in case the country needs to reduce gas consumption. 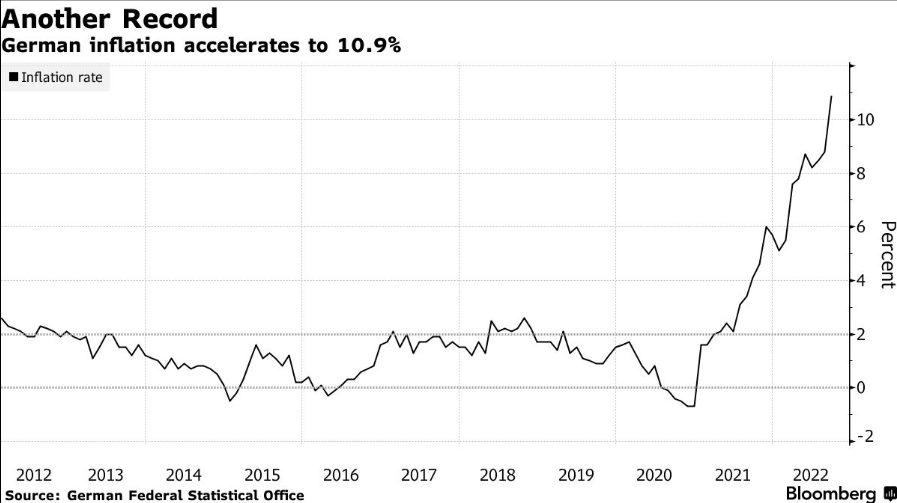 Germany reported double-digit annual inflation for the first time since the euro was introduced more than 20 years ago, with consumer prices surging more than anticipated after temporary government-relief measures ended and Europe’s energy crisis worsened. Inflation was at 10.9% in September, topping August’s 8.8% rate, the Federal Statistics Office said yesterday. The scale of the acceleration will trouble the ECB, which is struggling to tame soaring prices, whose persistent ascent is set to break another record when data are released today.