PwC Survey: “Great Resignation” of workers is set to continue

The “Great Resignation” will continue apace in the year ahead as one in five workers say they are likely to switch to a new employer in the next 12 months. That was a key finding from PwC’s Global Workforce Hopes and Fears survey of 52,195 workers in 44 countries and territories - one of the largest ever surveys of the global workforce. The survey finds that 35% are planning to ask their employer for more money in the next 12 months. Pressure on pay is highest in the tech sector where 44% of workers surveyed plan to ask for a raise and is lowest in the public sector (25%).

While an increase in pay is a main motivator for making a job change (71%), wanting a fulfilling job (69%) and wanting to truly be themselves at work (66%) round out the top 3 things workers are looking for. Nearly half (47%) prioritised being able to choose where they work. Workers who are likely to look for a new employer in the next 12 months are not satisfied with their current employer.

The survey found that 65% of workers discuss social and political issues with colleagues frequently or sometimes, with the number higher for younger workers (69%) and ethnic minorities (73%). Only 30% of employees say that their company provides support to help them work effectively with people who share different views.

Half of workers (53%) felt it was important that their employer is transparent about their impact on the environment, two-thirds (65%) felt transparency about health and safety was critical, with transparency about economic impact not far behind at 60%, followed by diversity and inclusion efforts at 54%.

•    26% of employees would prefer full-time remote work, but only 18% say their employers are likely to adopt that model.

•    Another 18% say that their employers are likely to require full-time in-person work, which just 11% of employees prefer.

The report can be found here 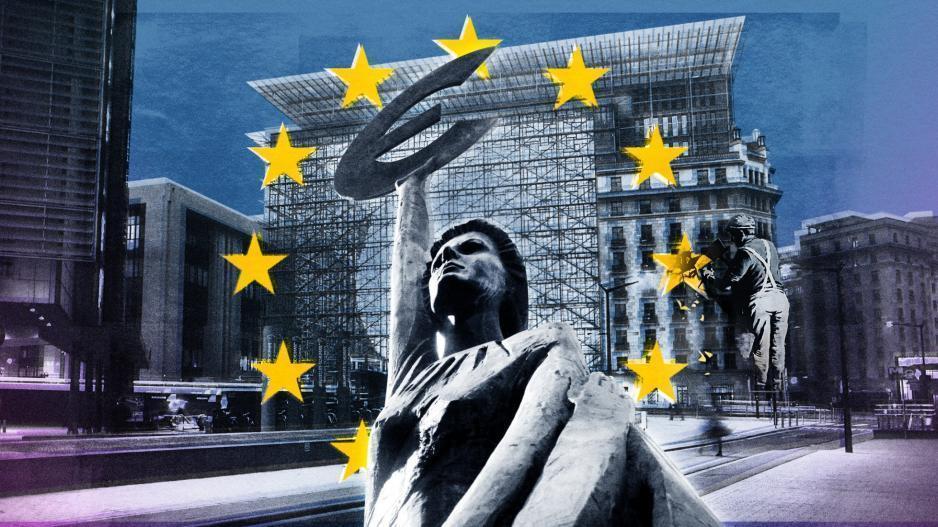 For Volodymyr Zelenskiy, the decision to grant EU candidacy status to Ukraine is a historic step to boost his embattled nation. For European Commission President Ursula von der Leyen, it’s the latest vindication of her hard-charging, risk-taking approach to leading the bloc’s response to Russia’s invasion. One senior official told us she has learned the lessons of past crises, when the EU paid a high-price for dithering, and is now seizing a moment when taboo after taboo has been cast aside. Some of her aides had been worried her dramatic trip to Kyiv earlier this month could backfire. Instead, it paid off, although officials are now bracing for more retaliation from Russia. Read more here about how von der Leyen helped chart the EU’s course.

What’s Happening
Close Friend | The EU reached an agreement with Norway to source more natural gas from the Nordic nation. The bloc is trying to lower surging prices and boost security of supplies after Russia cut flows to almost half of member states. “I never, ever mind being dependent on a close friend like Norway, but we never again have to be dependent on somebody like Putin,” said EU climate chief Frans Timmermans.

Coal Revival | Germany’s biggest utilities are working to revive their coal operations as the nation falls back on the dirtier fuel in a bid to reduce the use of gas for electricity generation. Economy Minister Robert Habeck warned that Russia’s cut to supplies risked sparking a collapse in energy markets, drawing a parallel to the role of Lehman Brothers in triggering the financial crisis.

Defensive Line | The ECB still hasn’t activated the bond-purchasing firepower signed off by policy makers more than a week ago as their first line of defense in a crisis, we’re told. Some officials worry that until the decision to “apply flexibility” to reinvestments from its pandemic emergency program becomes operational, debt markets remain vulnerable to investor speculation that could then spiral out of control.

Data Efficiency | Luxembourg, the Netherlands, Belgium, Germany and Denmark have teamed up to propose stricter energy efficiency measures for big tech when EU ministers meet on June 27. There are no binding comprehensive EU-wide standards on efficiency at data centers, which are set to proliferate across the continent.

Confidence Vote | Bulgaria descended deeper into political crisis as Prime Minister Kiril Petkov’s government lost a vote of no-confidence, raising the prospect of a fourth general election within only two years. Petkov, who has sought to tackle graft and curb Russian influence since taking office last year, will resign Monday after a former partner in his coalition joined opposition lawmakers to oust him in a parliamentary vote Wednesday.

In Case You Missed It
Russian Propaganda | Lithuanian President Gitanas Nauseda accused Russia of waging a propaganda battle and taking a threatening stance in a standoff over Vilnius restricting the transit of sanctioned goods to the Baltic exclave of Kaliningrad, which is sandwiched between Lithuania and Poland. He said the EU is "is working on a document" that will clarify the bloc's guidance in the coming days.

Free of Bailout | Air France-KLM could soon be free to resume acquisitions as the carrier prepares to pay back billions of euros in state funds needed to address fallout from the Covid-19 pandemic. The airline is planning to reimburse the rest of the cash owed to the Netherlands “within months” and 75% of French aid by the end of 2022, CEO Ben Smith said yesterday.

Iran Diplomacy | Iran’s top diplomat Hossein Amirabdollahian said he contacted his EU counterpart, Josep Borrell, during a visit to Tehran by Russia’s Foreign Minister Sergei Lavrov. It’s unclear whether the Russian envoy’s visit prompted the communication or if it amounts to any fresh progress in the crisis over the nuclear deal. Iran was hopeful that the nuclear talks would resume “in the near future.”

IPO Share | Boris Johnson’s vision for London to boost its standing as a global financial center and stock-market listings hub post-Brexit hasn’t exactly panned out so far. Since the shock vote to split with the EU in June 2016, initial public offerings have been losing steam in the UK. They made up 30% of total listing proceeds in Europe, down from 40% in the six preceding years, according to data we compiled.

Russia is probably earning just as much from natural gas exports to Europe as a year ago, even as it slashes deliveries to the region to multiyear lows. State-run gas giant Gazprom is still making roughly 100 million euros a day from exports to Europe, according to estimates from Independent Commodity Intelligence Services. European gas futures are trading at four times their level of last June. Prices are up 16% this week alone after Gazprom cut flows on the major Nord Stream pipeline, saying sanctions had stranded a key turbine in Canada after repairs. Germany said the cut was politically motivated and aimed at roiling markets.