Who is the Cypriot researcher working for ESA/NASA Solar Orbiter

A Cypriot researcher is part of the ESA/NASA Solar Orbiter mission team, which  aims to understand the main physical mechanisms of the Sun and how they affect space and planets.

Dr. Georgios Nicolaou, a professional member of the Cyprus Space Exploration Organisation (CSEO) talked to CNA about his role, as well as the aim and the importance of this mission, which will last around ten years and was launched from Cape Canaveral Air Force Station in Florida on the 9th of February 2020.

Stressing that the contribution of the Solar Orbiter to space exploration is crucial and of great importance, he said that
Solar Orbiter will take the measurements we need to understand important and fundamental mechanisms of the Sun, and how the Sun controls the heliosphere, the giant bubble that includes the entire solar system.

He added that Solar Orbiter will approach the Sun and take photographs of its regions, while at the same time it will analyze the Solar magnetic field and the material that is constantly flowing in space interacting with Earth and the planets in our solar system.

Dr Nicolaou has worked on several space missions by the European Space Agency (ESA) and the National Aeronautics and Space Administration (NASA). He has published papers with his studies on the properties of ions in the magnetosphere of Jupiter, on the thermodynamics of Solar Wind plasma, Heliospheric structures, dynamics of cometary ions, and plasma instrument

Speaking to CNA about Solar Orbiter, he said it is the first mission to bring telescopes closer to the Sun than ever before and it will image the poles of the Sun for the first time.

In addition, he told CNA that Solar Orbiter will understand how explosive regions on the Sun accelerate the energetic particles that flow in the Heliosphere.

"The Sun is an enormous source of energy that can impact our lives on Earth. Understanding its basic mechanisms and how it controls the region we live at, is without a doubt extremely important for humanity", he stressed.

Noting that Solar Orbiter is the result of an enormous effort from several scientists around the world, for many years, he told CNA that he joined the team of Solar Orbiter just in 2017, when he started working at the Mullard Space Science Laboratory.

Since then, he has been working on the characterization of the response of two plasma instruments on-board the spacecraft.

The specific instruments will measure and analyze the properties of the Solar Wind plasma which consist of Solar particles emitted constantly from the Sun and flowing outwards with high speeds.

"I have developed models to characterize the response of the instruments in expected conditions. These models will help the accurate analysis of the future data. I have also developed methods to derive important properties of the Solar Wind particles, which will help us to unlock the secrets of the Sun. My research focuses on the plasmadynamics, and the uniquedata-set βυ Solar Orbiter will bring new discoveries on the topic" he told CNA.

Dr Nicolaou was born in Nicosia in 1985. In 2005, he began his studies in Physics at the National and Kapodistrian University of Athens. During his studies he focused on the Space Physics research. In 2009 he started his master studies at the same university. In 2011, he began his PhD studies at the University of San Antonio, Texas. During his PhD studies, he worked as a researcher at Southwest Research Institute. Later on he worked as postdoctoral researcher at the Swedish Institute of Space Physics in Kiruna, Sweden. Since, 2017, he is working as postdoctoral researcher at the Mullard Space Science Laboratory of University College London.

Brussels Edition: Running out of options When EU leaders hold their call on Thursday to discuss the unfolding pandemic disaster, there’ll be an unwelcome guest in the virtual room: the specter of another lockdown. With efforts to limit the virus’s spread with softer measures — from mandatory mask-wearing to curfews — failing (so far) to deliver results, the drastic step that no European politician wants to take is back on the agenda. Arguably, with travel, entertainment and an ever-increasing number of other activities suspended, we’re already in a lockdown in all but name. But it could get worse and spell new risks for the region. A nascent economic rebound is already losing steam, and the social backlash against the latest restrictions is gathering momentum. Ahead of the Commission’s latest proposals for measures tomorrow, pressure is mounting to come up with something resembling a coherent response.

What’s Happening
Defense Projects | EU governments are closing in on an accord to allow countries outside the bloc to participate in joint defense projects, although limiting access to U.S. and British firms on lucrative contracts. We have the draft of the deal that may be approved as soon as this week.

Turkish Question | In addition to an escalating standoff with Greece, a conflict over Cyprus and a worsening currency rout, Turkey’s feud with Paris is intensifying, with President Erdogan urging a boyocott of French products. Decisions regarding Turkey are on the EU’s agenda for December, but the latest developments may give it a mention on the leaders’ call on Thursday.

Fish & Chips | If Britain does tumble out of the EU’s single market without an agreement, it will be in no small part because of pressure fishermen will have brought to bear on French President Emmanuel Macron. Our dispatch from France’s northern coast shows what’s at stake as negotiations to reach a post-Brexit trade deal continue.

German Economy | Germany expects the economic impact of the virus to be slightly less severe this year than feared, according to forecasts to be published tomorrow. That’s the good news for Europe’s biggest economy. The bad news is that German companies are losing faith in the recovery, potentially marking the beginning of a major economic setback.

Car Giant | Fiat and Peugeot are headed for EU antitrust approval for their plans to create the world’s fourth-biggest carmaker. Concessions offered by the companies to allay the bloc’s concerns received positive feedback, according to our reporting.

In Case You Missed It
Tech Liabilities | Big technology platforms are calling on the EU to protect them from legal liabilities for removing hate speech and illegal content as government scrutiny over such posts grows. The Commission wants to hold the likes of Facebook more responsible for the content on their sites, from terrorist propaganda to unsafe toys.

Arms Control | President Vladimir Putin offered new missile verification measures to NATO countries following the U.S. withdrawal from a Cold War-era treaty as Russia seeks to preserve the collapsing framework of nuclear arms control. Putin also offered not to deploy the missiles in Europe, unless the U.S. and its allies station weapons in places Moscow deems to violate the treaty.

EU Tariffs | The World Trade Organization formally authorized the EU to impose tariffs on about $4 billion worth of U.S. exports annually in retaliation for America’s illegal subsidies to Boeing. Nevertheless, officials in Brussels don’t expect to trigger retaliation until after the U.S. presidential election, in the hopes that Joe Biden wins and facilitates an amicable arrangement.

Polish Rights | Women’s groups are ramping up protests in Poland after the country’s top court practically banned abortion. The dynamic of the backlash has surprised the government, and more is to come this week. 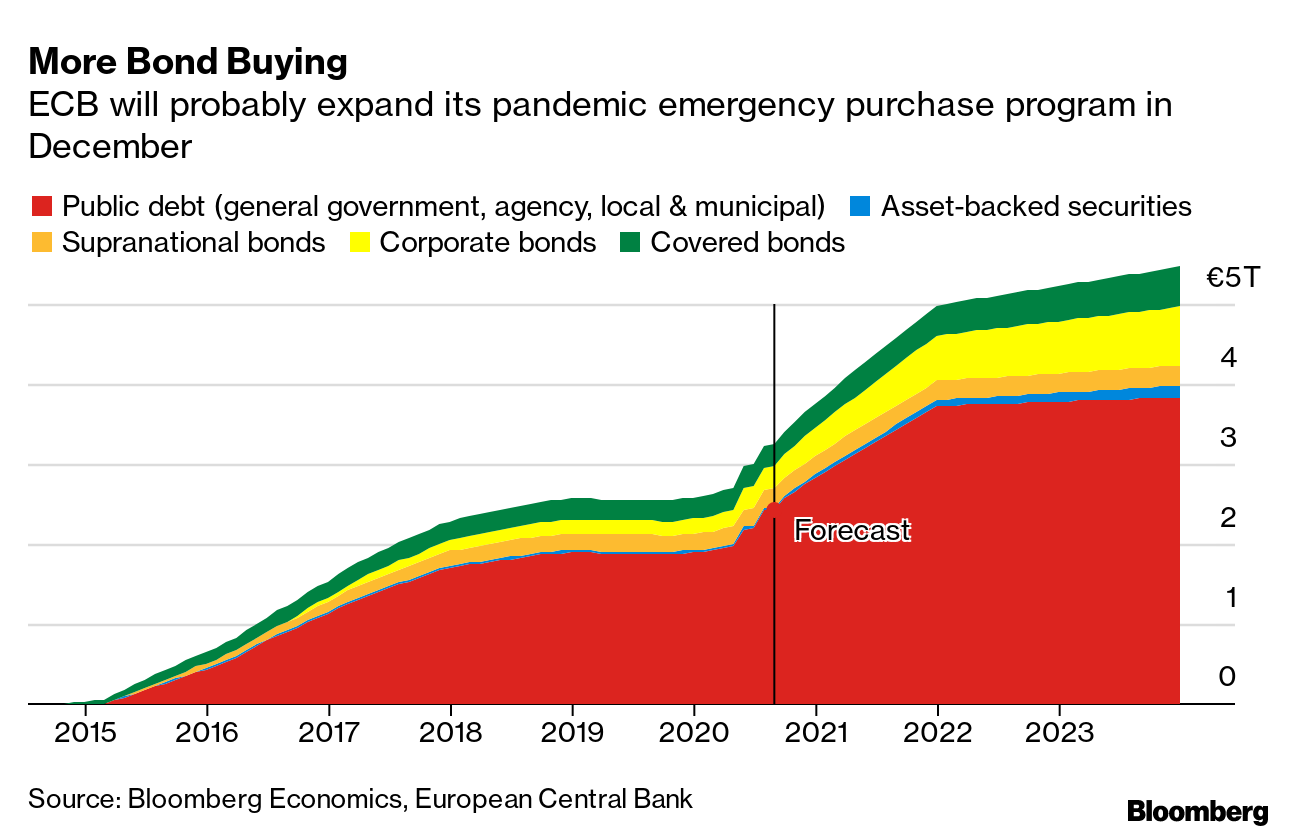 The European Central Bank’s Governing Council will probably announce in December an expansion of its pandemic emergency purchase program. The step is expected to be not only commensurate to the weakening economic outlook, but also allow room for maneuver if the situation deteriorates further. Here's the latest forecast from Bloomberg Economics.